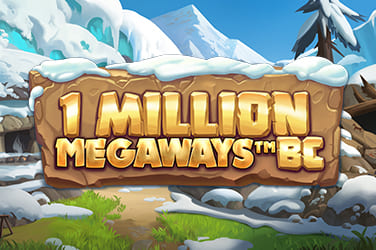 1 Million Megaways BC slot game provides players with the opportunity to win from over 1 million ways , as well as trigger a top free spins bonus feature!

Players will be taken back to the prehistoric era with this 1 Million Megaways BC slot game from Irondog Studios, as the developer have provided a theme that appears to mix a number of the eras together to give a top game experience.

The visuals applied are of the highest quality, with an impressive background and playing grid to have been provided, whilst the symbols available on the paytable have also been expertly drawn.

This 1 Million Megaways BC online slot game actually features over a million different ways to win when a special bonus feature is triggered , however with a total of 117,649 different paylines initially available to begin with, it can be considered the next best thing in the online slot game world.

Furthermore, the playing grid consists of a total of 7 reels in which icons can appear up to 7 times on each reel. There are a number of customisable settings also available to alter the gameplay experience, should Las Vegas Casino players feel they need to at any point.

There are a number of special bonus features available in this 1 Million Megaways BC online slot game, with the potential of over 1 million winning ways the main draw of this game!

To activate the possibility of playing with 1,058,841 different ways to win, players will need to trigger the Mammoth Reel feature, which will come into effect once players are able to land themselves a number of free spins.

Those that are able to land four cascade wins in a row will receive a minimum of 8 free spins, where they will receive an additional two more if they are able to continue to achieve consecutive cascades up to a maximum of 14. The Mammoth Reel will then be added to the middle of the grid and will hold up to 9 icons!

Furthermore, the cascading reels will come with increasing multipliers in any portion of the game, although in the bonus game, the counter will not reset and start again, thus providing players with an excellent opportunity to win some big rewards!

In addition, those who land 7 full icons on any of the reels will see them be locked, thus improving the total megaways available, as well as seeing the prize won be multiplied. Players who land the full 9 on the Mammoth Reel will see five free spins be awarded!

If that was not enough for the 1 Million Megaways BC slot game bonus features, there are a couple of wilds available, including the Sticky Wilds that can appear in the free spins game. These will remain in place for the duration of the game and continue to act as a traditional wild would, in regards to substituting for all other icons on the paytable.

There is a return to player (RTP) rate that sits at 96.20%, whilst the high volatility level means players are able to win big rewards, although rather infrequently.

This 1 Million Megaways BC online slot game features some of the best gameplay experiences that Las Vegas Casino players can enjoy, with some great free spins bonuses and the potential to win from over 1 million paylines!

This 1 Million Megaways BC online slot game features some of the best gameplay experiences that Las Vegas Casino players can enjoy, with some great free spins bonuses and the potential to win from over 1 million paylines!