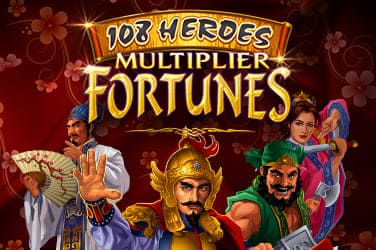 With multipliers, free spins and a top prize of 30,000 coins all available, Las Vegas Casino players will definitely want to give IGT Gaming’s 108 Heroes online slot game a play as soon as they can!

IGT Gaming’s 108 Heroes slot game features an oriental theme as players will feel as though they have been taken back to ancient Asia with this online slot game.

The visuals are of an impressive nature with a red background being provided behind the playing grid that features a golden trim.

There are a number of different symbols available on this paytable with five warriors, each wielding a formidable weapon being the main icons. Following these, there are the traditional royal playing card icons that are depicted as simple characters.

There are a number of special bonus features available in this 108 Heroes online slot game with the special icons all playing a role.

The wild symbol, which is the game’s logo, can substitute for each symbol that appears on the reels, apart from the scatter and the bonus icons.

The scatter icon, which is represented by oriental calligraphy, can provide players with some high rewards, as five of them will provide a payout of 30,000 coins.

However, those Las Vegas Casino players who land three or more of these on the reels will be provided with 10 free spins as well, which can see multipliers increase the prizes won.

The bonus icon that is available as a chest symbol can also provide rewards when three or more appear on a payline whilst also triggering a bonus game where players will be taken to a new screen and asked to choose from a number of chests. Each chest will hide a certain cash reward, and players will be able to win those when they select it.

IGT Gaming’s 108 Heroes online slot game features a return to player (RTP) rate of 96.56% and a volatility level of a medium rate.

If the fact that 30,000 coins as a maximum prize were not enough to convince players to give this 108 Heroes online slot game ago, then the free spins and multipliers that are available as bonus features should also be a further incentive.

Each of these mean players are able to win big rewards when they all combine, whilst the chest game only further enhances the potential prizes on offer that can be made when spinning the reels!