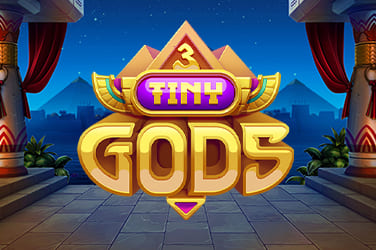 A multitude of bonus features including free spins and random bonuses are available to Las Vegas Casino players who give this 3 Tiny Gods slot game a spin!

This 3 Tiny Gods online slot game follows a simple theme that has taken inspiration from the ever-popular Ancient Egyptian period but has worked wonders to provide a top gaming experience.

Despite some simple visuals and graphics to have been adopted, the game is effective in immersing players, whilst the icons on the paytable of this online video slot game are incredibly appealing, as well.

There are a number of icons available in this game, with the traditional playing card suits all featuring as the low-value icons, whereas these are then followed by specific Ancient Egyptian icons, with a Bastet, an Anubis, Horus, Cleopatra and the Pharaoh all included.

The slot game’s Golden Wild can appear on all five reels of the game and will award the 3 Tiny Gods game players with 100x their stake if 5-of-a-kind is achieved. The symbol also has the ability to replace all other symbols, except for the Scatter.

Microgaming’s 3 Tiny Gods slot game features a traditional looking playing grid that consists of a total of 5 reels and 4 rows, whilst there are also a total of 30 different paylines available to try and form winning combinations on.

Furthermore, the developer has allowed Las Vegas Casino players to customise their playing experience by providing a number of functions such as the ‘Autospin’ and the ‘Quickspin’ buttons that can be incredibly useful.

Unsurprisingly, this 3 Tiny Gods online slot game has a number of different bonus features that can be activated, with each of the gods included in this game having the ability to provide the player with a different and unique bonus.

The ‘Mystery of Horus’ feature can be triggered randomly on any spin that takes place and will see it cover two or three adjacent reels with the eye icon. The stacks will then shatter and provide players with a common icon that has been chosen randomly.

The ‘Gift of Bastet’ feature is triggerable on a non-winning spin and will see the cat god appear and shuffle the reels to try and help form a winning combination.

One of the best 3 Tiny Gods bonus features is via the ‘Free Spins’ game which can be activated when players land 3 scatter icons on reels 1, 3 and 5. Players will start off with 8 free spins and gain access to the ‘Wrath of Anubis’ feature where they can win an additional 3 more free spins, although a maximum of 12 is available. In this feature, Anubis will remove all of the low-value icons available, thus helping players to form bigger wins.

It should also be known that the ‘Mystery of Horus’ feature can still be triggered during this game, as well.

The last of the 3 Tiny Gods bonus features that Microgaming has included is the ‘Jackpot bonus’ game that can be triggered when coins are collected in the normal game, with these appearing alongside certain icons on the playing grid.

Players do have the ability to use a bonus buy option if they want to access the free spins feature, although this will cost 75x the original bet.

Furthermore, a Return to Player (RTP) rate of 96.40% has been set for the 3 Tiny Gods slot game and this will give players a good opportunity to earn a number of payouts when spinning the reels, especially as the slot game’s volatility is set at a medium level.

Mircogaming’s 3 Tiny Gods online slot game features a number of cool bonus features that will keep players as interested as possible with this title, as there is a serious amount of action that can take place.

Befitting with the impressive Ancient Egyptian theme that has been provided, bettors will also be able to win some lucrative rewards when they trigger the 3 Tiny God bonuses features, making the gods anything but tiny!