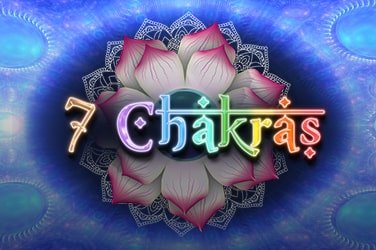 It’s time to find your inner peace and practice your lotus pose, because you’re going to need to chill out to win big with 7 Chakras slot game by Saucify. Loosely based on Hindu spiritual traditions, this video slot game brings together psychedelic visuals and calming music to create a unique slots experience. Don’t get too cosy, though, because this is actually a surprisingly high rolling slot, and with a high bet per spin limit you could soon find yourself materially rich even if you don’t find spirituality. So is 7 Chakras video slot the gateway to a better world, or is it all just mumbo jumbo? Let’s take a look.

7 Chakras is probably one of Saucify’s best-known slot games, as a brand that specialises in a huge range of smaller games rather than a few blockbuster titles. Most Saucify games make good use of their theme, and this game is no exception, though it’s much more mellow and less busy than Saucify’s other titles. The main symbols in the game are (obviously) the 7 Chakras of Hindu spiritualism, purple, blue, teal, green, yellow, orange and red, in order of their value. Sitar music jangles in the background and the pleasant sound of bells chiming greets each win.

So far so serene. With 49 paylines available in this online slto game you can bet anything from 0.01 credit all the way to 61 credits on a single spin, which is where this game starts to get interesting. From there you’ll also notice the stacked wilds, an image of a meditating figure which can take up two slots, giving you a better chance of winning and a nice 2x bonus every time you do. Thanks to the generous betting limits this is a video slot game where you can make quite a bit of money, though with a relatively low RTP of just 95.88% you’ll need to get into the bonus rounds to really secure your payday.

This slot game also features a second special symbol, the scatter, which is represented by a trippy looking lotus flower emblazoned with the other Chakra symbols. Land three of these and all that serenity goes out of the window, as your screen will be taken over by a giant lotus flower, adorned with seven coloured gems representing the Chakras from the main game.

You must pick each one, starting from the lowest to the highest value, and each will reward you with a multiplier or extra spins. Once you have revealed all your prizes, the spins you won will be combined with the number of scatters you originally landed to decide how many free spins you get, and you’ll then play them out. Sadly you can’t land any more scatters in the slot’s bonus round, so you can’t re-trigger it before the round ends.

This is an extremely generous bonus round from 7 Chakras slot game, one of the most generous out there at the moment, so your goal will be to trigger it as much as possible. That’s because, while wins are fairly regular in the main game, they’re not lucrative enough on their own to build a really big prize bank. Still 7 Chakras is a worthy-to-play slot game.

Find the best selection of slot games here on Las Vegas Casino and keep in touch with the ultimate online casino experience.