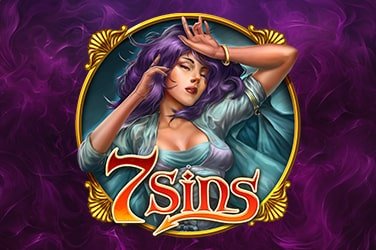 Play’n Go have been responsible for some of the most distinctive and successful online slots games in the modern industry, many of which are featured in the Las Vegas Casino collection. With 7 Sins, Play’n Go have taken an inventive approach to a traditional theme, and have produced a 5-reel slot with 243 ways to win and an impressive graphical impact.

This is a game that can be played with stakes of as little as €/£/$0.1 up to €/£/$100 per spin and has been designed to work well across most mobile devices. Besides the base game of 7 Sins slot there are two handy bonuses, as well as an increasing multiplier and a sticky expanded symbol using the middle reel.

Aesthetically, there is no doubt that 7 Sins slot game has it all. The setting is dark and it highlights seven portraits of women, each representing one of the deadly sins: Lust, Envy, Greed, Sloth, Gluttony, Pride and Vanity. You will also find the traditional card values of club, heart, spade and diamond on the reels, as well as two Wild icons. The Lucky 7 Wild is the most sought after symbol in 7 Sins slot game, offering players an impressive x70 the original stake, although this appears only on the odd reels.

The other Wild is the double Lucky 7 icon. This turns up only on the 2nd and the 4th reels for the slot and can substitute for any other symbol, apart from the game Scatter. And if you land two Double Lucky 7 icons at the same time, you could be in line for a big paying 7 of a kind combination.

The big attraction in this online slot game, and the best chance of landing some significant wins, is the Free Spins bonus feature. This 7 Sins game feature is triggered if you can land the Pandora’s Box icon on the odd-numbered reels simultaneously. You will be rewarded with two Pandora’s Box Scatter symbols and will launch the exciting Second Chance feature, which gives you the opportunity to select one from a line of seven figures in search of either a cash prize of the third Scatter.

Additionally, when you are in the Free Spins feature of the 7 Sins slot game, you will start off with a x1 multiplier. Each of the video slot game symbols representing a deadly sin will take a turn as a sticky expanding symbol on the middle reel. At the same time, the multiplier of the 7 Sins slot game will increase by 1 following every free spin, which means that you will be able to benefit from an impressive x7 multiplier on your last free spin.

There is no doubt that 7 Sins is a high-quality slot game from Play’n Go. It is a high variance game, offering the chance to win a prize that is up to x1,580 your original stake, with the biggest wins possible in the Free Spins bonus. The presentation is immaculate and the gameplay of 7 Sins slot has enough variety to appeal to a wide range of players, no matter what your slots gaming preference.

At Las Vegas Casino our focus is to provide you with the best online casino games from the most sought-after game providers available just like 7 Sins slot game.