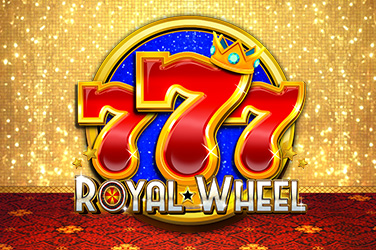 Players will truly feel as though they have entered a casino in Las Vegas when they play Microgaming’s 777 Royal Wheel online Videoslot!

The game features an impressive golden background that shines brightly, with glamorous red curtains to the side of the playing grid to help make players feel as though they are on a stage of some kind and helps to make them feel important.

In regards to the symbols that can be found on the 777 Royal Wheel online slot game paytable, many of the classic icons can be found, with the traditional royal playing cards making an appearance as the low-value icons, whilst these are then followed up by the single and double BARs, a red 7 that can appear as a single, double or triple and a golden crown, which is the game’s wild icon.

Players who play this 777 Royal Wheel online slot game will find that they are met with a golden playing grid that features 5 reels and 3 rows, although they will also be able to notice the wheel that is situated above it.

There are a total of 25 fixed paylines available in this game, with all wins being paid from left to right. Players are able to customise other options, though, via the game panel that can be found at the bottom of the screen.

With plenty of 777 Royal Wheel bonus features available to Las Vegas Casino players when they play this game, it is important not to waste any time!

Players will find it can be rather easy to win rewards in this slot game, although that is simply down to the great 777 Royal Wheel bonus features that are available. One of the reasons this exists is because of the respin feature that can be triggered every time a winning combination occurs on a spin!

Players will see the winning icons remain locked on the grid and a respin will take place that could potentially boost the overall winnings to a greater amount! Players will continue to collect respins for each winning combination on that turn, as well, therefore potentially landing a number of prizes from just one turn!

There is also a ‘Wild Wheel’ feature that can be triggered randomly on any turn. Once this happens, a random symbol will be selected to become a wild multiplier. Those that land several of these icons on one spin together will be able to combine them and potentially win a reward worth a whopping 24x the bet!

Bets can be placed from as low as €/£/$0.25 per spin, whilst a maximum bet for those at Las Vegas Casino that like to wager higher amounts stands at €/£/$75 for each spin that they decide to take.

The return to player (RTP) rate for this 777 Royal Wheel online slot game is 94.4% and the game features a level of high volatility.

The respins and the random bonuses that can be achieved are exciting and will keep bettors on edge throughout their gameplay experience. What more can be asked from a slot game?!