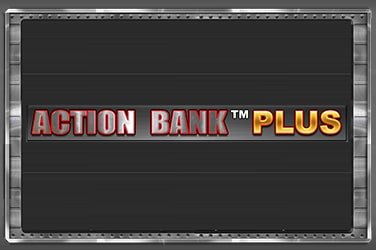 Action Bank is an online slot game from Barcrest which combines a bank robbery theme with everybody’s favourite classic game: noughts and crosses. Noughts and crosses spin on the reels hoping to land in that winning three or more of a kind combo. It’s a decent slot game that’s still fun to play despite being released back in 2016, although the game’s graphics do look a little dated compared to newer titles by major providers like NetEnt.

Action Bank is a 20 payline slot in which players line up symbols of noughts, crosses, 7s, and bars in order to win in the basic game. The highest paying symbol of Action Bank slot game  is the 7 symbol, which pays out between 20x and 500x the bet for between three and five on a line, while the bar symbol pays between 10x and 100x the bet and the cross pays up to 50x the bet for five on a line. There’s also a joker Wild on Action Bank video slot which substitutes for any other symbols on a payline.

There are some very nice features on offer in the Action Bank video slot game. Scattered vault symbols are the key to unlocking the game’s Free Spins bonus mode, in which players will win between 5 and 30 free spins plus a chance to unlock the game’s second big feature, the Big Bank Bonus. During Free spins, each reel containing the O symbol has a chance of that symbol transforming into the vault Scatter and unlocking more free spins or a chance to unlock the Big Bank Bonus.

The Big Bank Bonus game of Action Bank slot game awards either a diamond, ruby, or sapphire multiplier. The slot players pick vault doors to reveal the gems until three of a kind are revealed and award the relevant multiplier.

Action Bank online slot game which runs smoothly on any kind of device including both mobile devices and traditional laptops and desktops. Whether you play on iOS or Android tablets or smartphones, you shouldn’t have a problem playing Action Bank while on the go.

The online slot game offers a return to player of 95.16%, a little below average for a slot game of this kind. This means that for every $/€/£100 spent on the reels of Action Bank, players can expect to win back around $/€/£95.16. This isn’t as high as it could be, although we suspect that it won’t put keen fans off – if you enjoy the game, play to have fun, not to win money.

While the game looks a little dated today, it’s still a fun slot to play. By far the best part of the game is unlocking the Big Bank Bonus during free spins and clicking to reveal those mystery doors, and it’s worth giving the reels a few spins just to unlock this feature. Beyond that, there are better, more modern bank robbery themed slots out there like Break Da Bank and so it’s tough to see this slot topping anyone’s lists this year.