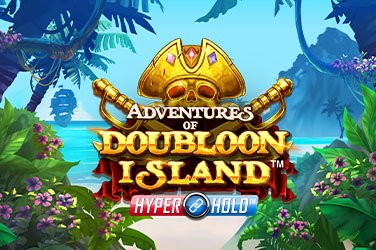 Microgaming’s Adventures of Dubloon Island features a number of special bonuses including a free spins round, as well as a fixed RTP rate of 96.01%.

Microgaming have gone down the pirate-inspired theme route with this Adventures of Dubloon Island slot game and have provided a number of visuals that give a rather fun feeling, rather than one that would leave players scared of the pirates involved.

Players will be met with a background that features a blue sea, and a pirate boat shadowed in the background, whilst it appears as though they are in the middle of a jungle, as there are green leaves surrounding the playing grid in the bottom corners.

Furthermore, the icons on the paytable of this online slot game certainly helps to bring the pirate theme to life, as each of them have some resemblance to the game. Players will find that there are diamond-shaped playing card suits available as the low icons, whilst there are a pair of swords, a parrot, a purple pirate and a red captain available as the game’s high symbols.

Players will also be able to win when they land a combination of the scatter icons, which is represented by a treasure chest, and the game’s wild, which is a female pirate.

There are a total of 20 fixed paylines in this Adventures of Dubloon Island online slot, with players being provided with a playing grid that consists of 5 reels and 3 rows.

Furthermore, Microgaming has provided a game panel at the bottom of the screen that allows players to customise their user experience.

As mentioned, there are a number of special bonus features available in this Adventures of Dubloon Island video slot.

The first of them many may find is the ‘Win Booster’ bonus. This feature is an optional one that can be toggled on and off before each spin takes place. Those who activate this ‘Win Boost’ will see their stake increased by 1.5x, but will also then see the possibility of winning rewards also further increased.

The main bonus of this online slot by Microgaming is the ‘HyperHold’ bonus and this can be triggered when 6 or more of the HyperHold scatter icons appear in any of the reels during the normal game.

Players who managed to land 6 or more will be provided with 3 re-spins, whilst each time a new HyperHold scatter lands, the Free Spins counter will be reset. Each time a symbol lands in view, it will be worth a cash prize worth between 1x and 50x the total bet, whilst the symbols can also reveal one of the game’s four jackpots that are worth up to 2000x or 3333x the bet when the Win Booster mechanic is activated.

The last special bonus feature in this Adventures of Dubloon Island slot game is the free spins round and this can be triggered when 3, 4, or 5 of the treasure chest scatter icons appear anywhere on the game’s reels.

During this feature, the game’s lowest paying icons will be removed, allowing only combinations that involve the higher valued icons to be made. If players land 3, 4, or 5 more of the scatter icons during the game, they will also retrigger the free spins feature.

The return to player (RTP) rate of this Adventures of Dubloon Island slot game is 96.01%, which can be considered to be rather standard.

Pirate-themed online slot games have always proven to be rather popular and this Adventures of Dubloon Island title from Microgaming looks to try to jump on that bandwagon.

The gameplay is rather exciting, considering the awesome brilliant bonus features available, whilst the fun visuals help to make this video game remain rather enjoyable.