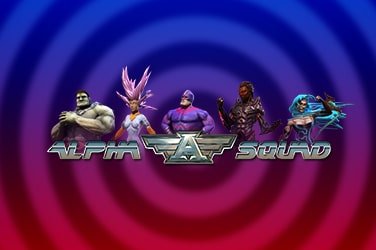 Everyone can relate to a classic superhero montage where the best of the best band together and fight for justice. Genii’s Alpha Squad gives you an authentic comic book style experience through some unique character designs, an immersive gameplay experience and some hefty payouts.

Alpha Squad slot has 5 reels over 30 paylines. Some of its attractions include the classic wilds, scatters and free spins that have a high win variations value. In conjunction with its hefty jackpot bonuses, the game’s promise and design instils a sense of hope and wonder into the players.

The most common observation players make is the similarity between the designs of the game’s superheroes to those of Marvel and DC. While many characters resemble several franchised superheroes, players have conveyed a positive reaction to Alpha Squad’s characters, revealing that they are unique in their own right.

With a sophisticated colour palette involving a dark red background and slightly lighter colours on the reel, Alpha Squad slot succeeds in looking like a coveted comic book. And though the overall graphics in the game may come off as a bit simple, Genii’s minimalist design is effective in immersing any player into an already popular theme.

The betting range of Alpha Squad video slot is between 0.01 to 45 credits. The breadth of this range is between low and medium making it an appropriate choice for fans and players on a budget. Additionally, the game’s user interface is quite smooth and easy to navigate. Alpha Squad slot game works without fault on all devices.

The objective of the game is to create a combination of similar symbols adjacent to each other in order to win payouts. Note that some symbols yield higher rewards than others. For instance any hero symbol will yield a far higher reward than a car, or fighter jet symbol.

The game has a top payout of 120000 coins that can be won by combining standard gameplay with Alpha Squad video slot features and bonuses.

The wild in this game is represented by the Alpha Squad logo. This has the ability to replace any symbol on the grid except the scatter and the free spins logo. This helps the player win better rewards. In addition, If the player encounters between 2-5 villain lair icons, they could win from 3 – 150 coins.

The scatter symbol of the game is the hero island icon. This can trigger free spins. If 4 or 5 scatters land anywhere on the reels, the player can win 6,12 or 24 free spins that further has the potential of being re-triggered.

The return to player (RTP) of Alpha squad slot game is 94%. This means that theoretically, a player wins an average of 96 for every 100 bet made, Note that this average is a cumulative of over 4000 attempts. This is slightly below the industry average and has low to medium volatility and variance.

With an excellent design and relatively stable payouts, Alpha Squad’s gameplay experience is highly desirable and will stand the test of time. This gives Genii’s more popular productions a solid replay value.