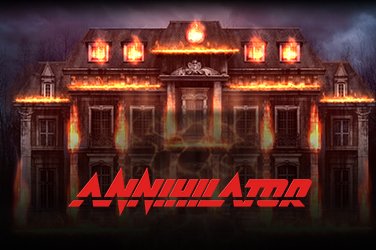 This is an online video slot released by Play’n Go, one of the most prolific slot game developers on the market. Annihilator is officially tied to Canadian thrash metal band with the same name, making it perfect for those who love to head-bang while playing slots.

Annihilator can be played for free or with cash, and is suitable for mobile, desktop or tablet devices. Its RTP is a solid 96.2% and its variance is 8/10. The game has a number of different bonus features and the maximum pay-out for playing is 400 times your stake for each spin. Thanks to Annihilator’s Free Spin feature, players can end up winning a grand total of 5,000 times their original stake in this game.

The online slot contains 3 rows, 5 reels, and 10 pay lines. These pay lines are all fixed and winning combinations can be formed by hitting upon three or more matching symbols across any of them. Annihilator players can choose to play from 0.10 coins stretching all the way to 100 coins for every spin. There is an Auto Play feature allowing you to opt for a set number of up to 100 spins.

The graphics in the Play’n Go online casino game Annihilator are well-crafted and feature a spooky mansion setting with plenty of eye-catching details – this is great news if you appreciate a well-considered theme and artistic game production. The accompanying playlist of the slot will be very welcome if you appreciate thrash metal, but you may have to hit the mute button if it’s not to your tastes.

The game symbols used on the Annihilator slot reels include blood-soaked royals and letters, as well as higher value images including a broken mirror, an Epiphone guitar, and Alice with a Clare doll. The wild symbol is guitarist Jeff Waters, which substitutes for all symbols bar the bonus and scatter symbols. Only a combination of 5 wilds will represent a win, paying 40 times your stake.

There are three bonus features available in the video slot Annihilator, including:

The Annihilator slot feature Fun Palace can be triggered whenever players get three doll bonus scatters on the second, third and fourth reels during a base game. When this happens, the slot game players will enter the so-called Fun Palace, which is filled with eerie dolls. They must then select one of the dolls, behind which will be a prize, the highest of which amounts to 50 times your total stake.

Finally, this Annihilator slot feature is activated when devil-emblazoned scatter symbols appear on the first, third and fifth reels during a base game. The mansion will be set on fire and the player will be awarded 8 free spins, as well as an expanded wild reel for each free spin.

All in all, Annihilator online casino game is one of the most visually stimulating slot video games on the market. It should be noted, however, that its payouts can be a little disappointing compared to other games from Play’n Go.

Enjoy one of the most realistic online gaming experiences at Las Vegas Casino playing the ultimate and popular online slots and live dealer table games. Let us know what you think of the Annihilator slot by rating it.