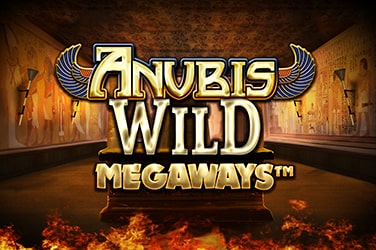 Up to 117,649 paylines and special bonus features await Las Vegas Casino players who decide to give this Anubis Wild Megaways Videoslot a spin!

Ancient Egypt is the name of the game for this Anubis Wild Megaways online slot game from Inspired Gaming, although that will hardly come as a surprise considering the actual name of this slot game.

This Anubis Wild Megaways online slot game features some rather cool graphics and visuals, as players will be taken inside a pyramid as they will be able to see some traditional ancient Egyptian drawings that are lit by some burning flames.

In regards to the playing grid and the symbols, the theme continues to be applied expertly well, as there is a golden element to it, with each of the icons appearing to be rather great on the eyes, whilst the animations help to bring it to life.

The traditional playing card icons appear as colourful letters, whilst they are then followed by traditional Egyptian objects and creatures, such as scarab beetles and the Egyptian Queen, as well as the Pharoah mask and the eye of Horus icon following thereafter.

All games that feature the Megaways mechanic will follow the same playing grid structure, which means it is no surprise that there are a total of 6 reels available and 117,649 different paylines available to form winning combinations on.

There are a number of customisable features available to use that can further enhance the gameplay experience, with buttons located on either side of the playing grid.

With a plethora of Anubis Wild Megaways bonus features available, it is worth checking out how these can help players who play this game.

The first is the ‘Free Spins’ bonus and this can be triggered when players are able to land three or more of the pyramid scatter icons on the reels in any position. Once players trigger this game, they will see a ‘Bonus Top Up’ screen appear where they must choose whether to gamble or collect the free spins on offer. There are 12 that can be awarded, with two more being added each time another pyramid icon appears. The free spin limit is 82.

Players who do choose the gamble feature will see more free spins be awarded but a losing outcome will see those free spins be forfeited for a mystery multiplier instead, with 4x the bet the most that can be won.

There are a number of ‘?’ icons that can appear on the playing grid in this Anubis Wild Megaways online slot game and these can help to boost wins by turning into any regular icon available on the paytable.

Inspired Gaming have also included the ‘Spin Chance’ feature which is where players are able to spin the reels when they do not have the actual credit to do so after spending all of it.

The final feature that players will likely see on a regular basis is the ‘Cascading Reels’ feature which will happen after each win that is obtained. The winning icons will disappear and allow for new icons to fall in their place in order to try and further the wins that can be obtained on that single spin. This process will continue until no further wins are possible.

We discovered that Inspired Gaming has provided this Anubis Wild Megaways online slot game with a return to player (RTP) rate of 95.81% and have set the volatility level at a rate that is considered to be of a high volatility.

With so many different bonus features available including the mystery icons and the free spins game, this Anubis Wild Megaways online slot game from Inspired Gaming will provide Las Vegas Casino players with a huge amount of joy and excitement, especially given that there are 117,649 different paylines available to win from!