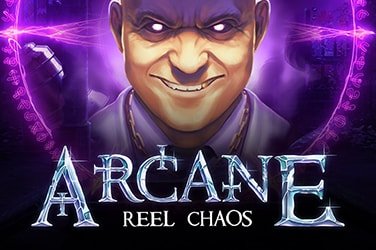 A number of special bonus features and games are available to play in this Arcane: Reel Chaos online slot game that will leave Las Vegas Casino players spinning the reels for as long as they can!

Arcane: Reel Chaos has been expertly designed by NetEnt as they have provided players with a slot game that consists of a number of excellent graphics. These include the background to the slot game, with an impressive setting having been provided whilst the playing grid is also expertly designed.

Furthermore, there are a wide array of different icons available on the paytable of this online slot game, with the traditional playing card icons – 10, J, Q, K and A – all being available, whilst Flare, Chronos, Zero X and Psyop are the symbols that need to be collected from the paytable.

Deep Pockets is the game’s most rewarding icon, though, as he has the ability to provide Las Vegas Casino players with 50x their stake when five of him land on the grid on an active payline.

In addition, there is a Wild available which can substitute all icons on the grid to help form wins, although it does not have the ability to transform the Scatter; however this icon has its own rewarding feature when three feature!

This Arcane: Reel Chaos online slot game has a playing grid that is played across 5 reels and 3 rows, whereas there are a total of 20 paylines available to form winning combinations. These paylines are fixed, therefore meaning they can not be adjusted.

However, there is the ability to make the reels turn faster or let them spin automatically with the functions that have been provided in the slot game panel at the bottom of the playing grid.

There are a number of great Arcane: Reel Chaos bonus features available in this online slot game, so it is best to jump straight in!

The scatter of this online slot game can provide players with a free spins game that can be played over four levels, although three of these icons will need to appear on reels 1, 3 and 5 in a single spin.

Players will need to look to take on Deep Pockets – the villain of this online slot game – over the four levels, with each getting more difficult but equally rewarding when successful. Each level will see the villain’s health points increase, but if players are able to pass all four stages, they will win an extra reward which is known as the ‘Victory Bonus’.

Furthermore, each character in this online slot game has the ability to trigger additional feature bonuses:

Pysop will activate a Stacked Wilds feature which will see three of them cover a whole reel. Between two or three reels will be covered.

Zero X activates the Overlay Wilds feature and this will see between three and five Wilds be added to the reels randomly.

The Flare character will trigger a Multiplier feature and will see wins be increased by either 3x, 4x or 5x when they occur.

Chronos, though, provides players with a re-spin feature. This is activated when a non-winning spin happens, although it is random. Players will see each reel re-spin in the attempt to form a winning combination. This will continue to happen until one does appear. Each re-spin, though, will provide players with a multiplier that progresses in value starting from 2x and going up to 10x.

NetEnt’s Arcane: Reel Chaos online slot game can be enjoyed with a minimum bet of €/£/$0.20 per spin, although those that like to wager a little more can place a maximum bet of €/£/$20 on each turn that they make.

Featuring a low volatility level, players will find that the return to player (RTP) rate for this online slot game is 96.81%.

Indeed, after reading the Arcane: Reel Chaos bonus features section, there will be no reason as to why Las Vegas Casino players will want to give this online slot game a miss! Each of the characters will provide players with a top bonus, with each potentially making their whole experience rather financially rewarding!