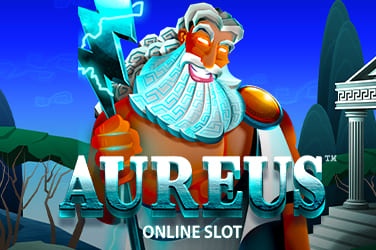 Various coins and random bonus features all await Las Vegas Casino players who go on this Ancient Rome adventure in Aureus online slot game, although the respin bonuses is also a nice touch!

Microgaming has teamed with Crazy Tooth Studios to provide an Ancient Rome-themed inspired game with their Aureus online slot game as they have taken inspiration from the Roman god of Jupiter.

There are a number of cartoonish visuals to have been provided in this game, whilst there are also animations that can be found, with a character representing Jupiter being rather animated next to the playing grid.

There are just three basic icons that can be found, with silver, bronze and gold coins all available to collect. These icons do come in different forms, though, with each providing a different payout when they are used in a winning combination.

This Aureus online slot game is played on a grid that features 3 reels and 5 rows, however, there are no traditional pay lines attached to this game. In fact, Microgaming and Crazy Tooth Studios have decided to use their CoinVerge mechanic.

This mechanism will see that when the open and closed brackets that appear on the playing grid manage to line up successful will form a collection area. The values that are made in the collection area will then be paid out, thus providing Las Vegas Casino players with something truly different!

Unsurprisingly, this Aureus online slot game features a number of special features and icons that can be used to help players to win bigger rewards when playing this game.

One of the main Aureus bonus features can be triggered at any point, as it is random and can see one or more special icons appear at any time. If these icons appear in the collection area, players will be able to trigger the feature that they can provide.

There is also a collect column coin that is available, and this will see all coins displayed on that reel being collected, as well. The collect all coin, though, will see every coin on the playing grid be collected, whilst the respins coin will provide players with either 2, 3, or 5 respins!

The respins Aureus bonus feature will see the collection area remain active for the duration of the bonus, with each award being paid out on each respin. The maximum number of respins possible is 8.

The last of the Aureus bonus features is the Lightning feature, which will be triggered randomly in this game. When a closing bracket appears on the reels, an opening bracket can be added to trigger winning combinations wherever possible!

The return to player (RTP) rate for this Aureus online slot game is 96% and features a medium volatility level.

Aureus online video slot game has been packed with a number of random special bonus features that will certainly keep players on their toes when spinning the reels, as these can prove to be rather lucrative at times.

The respins bonus is a great way of obtaining further wins whilst the coin multiplier is a top way of boosting those that do occur when on the playing grid!