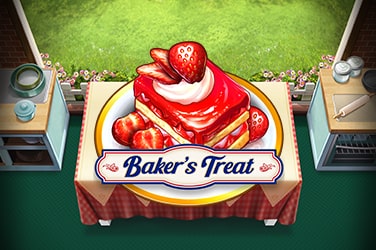 With five special additional treats and bonuses, as well as a free spins game, Las Vegas Casino players will love what this Baker’s Treats online slot game will provide them with!

Having arguably taken inspiration from the hit TV show, the Great British Bake Off, Play’n GO have provided Las Vegas Casino players with their own virtual opportunity to produce some of their own tasty treats.

The game has been designed expertly well, with a number of icons available on the paytable of this Baker’s Treats online slot game all looking mouth-wateringly delicious.

The icons available in this game feature five different macaroons of different colours, which are then followed by lemon cheesecakes, carrot cakes, blueberry pies, cupcakes and strawberry sponges, which are all worth a little more; the latter being worth up to 40x the bet when five appear on a payline.

There is a triple-layered berry cake as well, which is the game’s Wild and this can also payout at 40x the stake when five are landed across the reels.

Having adopted a rather traditional playing grid for this Baker’s Treat online video slot game, players will find that there are a total of 5 reels that the icons can fall upon. In addition, there are 15 fixed paylines, as well, although with a ‘Pays Both Ways’ mechanic available, Las Vegas Casino players can actually win from 30 different ways!

Play’n GO have truly rewarded Las Vegas Casino players who play this Baker’s Treats online slot game with a number of different bonus features that will continue to satisfy the sweet tooth they might have then they spin the reels.

There are five Flour Power Spin features, which are as follows:

Furthermore, there is also the possibility of triggering the ‘Bake Off Free Spins’ bonus game, as well. Players will be able to trigger this when five dessert cakes land on the reels in one go, with players being rewarded with one spin for each of the aforementioned Flour Power features in consecutive spins.

After these all take place, a further free spin may be awarded if players have one of the dessert cakes appearing as a stacked icon on a reel during the feature. Those that achieve this will receive an extra 10 free spins!

Las Vegas Casino players will be able to play this Baker’s Treats online video slot game with a minimum bet of €/£/$0.15 per spin, although a maximum bet of €/£/$75 per spin can also be wagered for those who like to bet larger amounts.

The game features a high volatility level, as well, although the return to player (RTP) rate of 96.04% helps this be rather standard.

Las Vegas Casino players will certainly find that their sweet tooth has been satisfied with this game, as there are a number of sweet Baker’s Treats special bonuses available that can make players feel extremely rewarded.

The potential to have a number of free spins and special symbols such as expanding wilds will certainly sweeten the deal and inject bettors with that sugar rush that they might have been looking for!