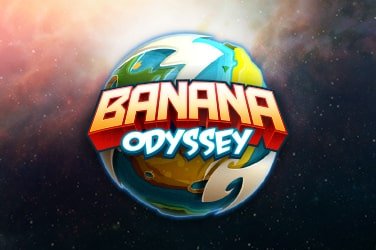 Banana Odyssey, by Microgaming, is an interesting video slot, which features two monkeys as space travelers. This is undoubtedly an unusual theme for a slot game, but Microgaming have managed to pack enough into it to make it entertaining and rewarding for slot game players.

The reels are on a background of outer space, with stars set against a bright orange and black sky, the sort one often sees in photos taken by telescopes. In Banana Odyssey the monkeys are of course on the reels, as are futuristic ray guns and jars with nuts, along with the standard Royals from a card deck as the low-value icons.

The setup and look of In Banana Odyssey online slot game at once manages to be futuristic and retro at the same time.

Banana Odyssey is a five reel slot with three rows and 10 paylines. The paylines pay both ways, so you do not need to worry about the symbols only providing wins if they are from left to right. The monkey symbols are the highest-paying ones in Banana Odyssey video slot game, paying out 10x if you land five of them on the reels, while the laser gun and the jar of nuts will deliver 8x and 6x respectively for five of a kind. The royals pay out between 2x and 3.5x for landing five across a reel.

In Banana Odyssey, wilds land on the reels only on the middle three reels, and these are expanding, while the appearance of a wild will automatically trigger a respin of the other reels. You can get up to three respins in this manner.

Getting three scatter symbols on the reels will trigger the bonus round, where you get 10 free spins. In Banana Odyssey slot the expanding sticky wilds will be available here too, which can give you some big wins throughout the round. Unfortunately, the free spins cannot be retriggered.

The betting range for Banana Odyssey slot is from 0.10 credits all the way up to 400 credits per spin. The maximum win possible is 400x of the stake – this is a low volatility slot game with the RTP at 96.31%

Banana Odyssey online slot is a well balanced offering from Microgaming. The theme is quite original, without going overboard and taking over the game itself, but it serves to provide a good experience from start to finish. While Banana Odyssey game features are pretty standard, the appearance of sticky expanding wilds has the potential to provide some big wins, even though this is a low variance slot where players can expect frequent low value wins. It is therefore best for those who want to play low-risk games.

Try this and other great slots at Las Vegas Casino .com