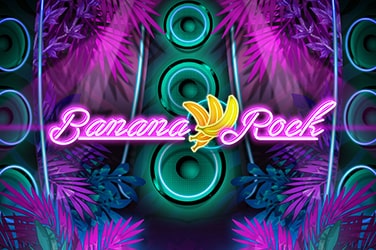 With 10 free spins and the potential of picking up a multiplier worth 25x the bet, Las Vegas Casino players will be able to rock out to this Banana Rock slot game from Play’n GO!

Play’n GO have proven that they can provide Las Vegas Casino players with some of the best games visually, whilst also proving that they do not lack some imagination and inventiveness when they look to try and create new games to play.

Indeed, their Banana Rock online slot game appears to have been rather inventive as players will be met with a band of six monkeys that are rocking to some of the hit tunes that they have managed to produce.

When looking at the paytable of this game, there are a number of different symbols available, including the low-end royal card numbers J, Q, K and A. Following these are the Bongo drummer, bass player, keyboard player, drummer and guitarist monkeys.

The symbols also act a little differently in this Banana Rock online slot game, with the five band members being able to appear fully stacked, whereas the other icons can appear as two high.

The smirking monkey that is wearing sunglasses is the game’s wild and the most rewarding in this online slot game, whilst the scatter is represented by a bunch of bananas that are accompanied by the game’s logo, but this icon can only appear on reels 1 and 5.

This Banana Rock video slot game has a playing grid that features 5 reels, 3 rows and a total of 10 fixed paylines in which players are able to try and form winning combinations on to receive prizes.

Players are able to make the most of an ‘Autoplay’ function, as they are able to spin the reels for a period of between 10 and 500 continuous spins for uninterrupted gameplay, thus allowing them to sit back and let the game do its thing.

There are an array of different Banana Rock bonus features available in this online slot game, with players able to make the most of some great free spin games.

The first is the ‘Rock ‘N’ Rollin’’ feature, which will see players receive a respin when two of the wilds the game’s name written on them appear on the reels. These reels will then be locked and the others will be respun.

Those that land the scatter icon on reels 1 and 5 will be able to trigger the free spins feature in this online slot game, although this can only happen once. Those that do manage to achieve this will receive 10 free spins and any additional scatters that appear in the bonus game will provide an additional free spin.

Las Vegas Casino players who land a fully stacked band member during a free spin will receive a multiplier of 1x their bet for each time it happens, thus being able to claim up to 5x.

Players will be able to make the most of a 25x multiplier in the free spins game, as well, but this can only appear once.

96.60% has been set as the return to player (RTP) rate for this Banana Rock online video slot game, with Play’n GO having set the game to have a medium volatility level.

The Banana Rock slot game from Play’n GO will provide Las Vegas Casino players with all the fun and enjoyment that they need when playing this game, as they will be able to win a number of lucrative rewards via the use of the Banana Rock special bonus features.

Free Spins, multipliers and stacked icons all make an appearance, thus meaning plenty of fun can be triggered throughout the entire game!