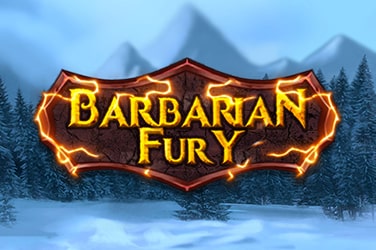 There will be no fury felt by Las Vegas Casino players in this Barbarian Fury online Video Slot, especially with special bonuses such as ‘XNudge’, ‘Barbarian Respins’ and ‘Fury Spins’ all available!

Players will feel as though they are immediately immersed in this Barbarian Fury online slot game as they will be taken to a snowy forest as soon as the game loads. The graphics and visuals are of a quality level and are of stunning nature.

NoLimit City has also provided this title with some brilliant images and icons that can be found on the paytable, with a number of shields with the traditional playing card letters and numbers emblazoned on them, whilst there are three Barbarian warriors that can also land on the reels, with each of them having the potential to fill the reel as they fill four spaces!

In addition, there are a number of special icons available, including the bear that is the wild and the wolf that is a scatter, but more on these icons in the Barbarian Fury bonus features section!

The playing grid that has been provided in this online slot game consists of 5 reels and 4 rows, whilst NoLimit City have provided players with a total of 25 paylines that are fixed and in play at all times.

There are a number of different buttons that can be accessed that will allow players to customise their gameplay experiences, though.

As mentioned earlier, there are a number of Barbarian Fury bonus features available in this online slot game, with three of significance.

The first is the ‘XNudge Feature’ which can be triggered in the base game and when the bear lands on the reels. This wild icon will be nudged into place in order to fill the entire reel and then take on a multiplier value. Each nudge will see the multiplier increase by 1x and up to a maximum of 4x. If more than one bear appears on a single spin, they will then be added together!

The ‘Barbarian Respin’ bonus is triggered whenever three or more matching Barbarians land on the reels at the same time anywhere on the playing grid. If this happens, they will be nudged to fill each of their reels and then locked into place for one respin that will take place on the two remaining reels that do not feature them.

The last of the Barbarian Fury bonus features available in this slot game is the ‘Fury Spins’ feature, which will become active when players land 3 or more of the scatter icons anywhere on the reels. Players will see the scatters be nudged one position downwards if they trigger this feature until they completely disappear from their respective reels. The number of nudges that it takes will determine how many free spins will be awarded.

The return to player (RTP) rate for this Barbarian Fury online slot game is 96.06% but it should be noted that NoLimit City has made this game incredibly volatile, with the developer claiming it to have a variance level of 9 out of a possible 10.

Bets can be made for a minimum of €/£/$0.25 per spin, although Las Vegas Casino players might be happier to learn that a maximum bet of €/£/$125 per spin can also be placed!

Indeed, with the wide array of Barbarian Fury bonus features available on the grid, Las Vegas Casino players will be able to enjoy some potentially lucrative and rewarding moments when they spin the reels.

With a number of multipliers and nudges all available, there is no reason as to why players should get furious with this online slot game from NoLimit City.