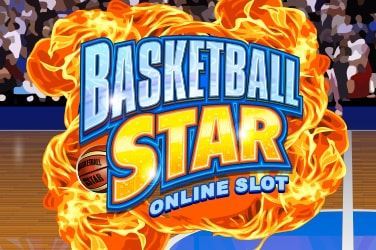 Basketball Star, first released in 2015, is a Microgaming slot game themed around the sport that made Michael Jordan famous. The game is set on the basketball court, and every time players spin the reels, filled with basketball action shots, trainers, and medals, they’ll be met with cheers from the crowd. The slot game’s graphics are bright and attractive, although they do look a little outdated by today’s standards, and the gameplay is pretty fun, too.

This is a ways to win slot featuring 243 ways to win, so all players have to do is land identical symbols anywhere on adjacent reels of the slot, running from left to right. Each game’s symbol doesn’t pay out huge amounts: the Basketball Star slot’s top-paying basic symbols are the action shots, which pay up to 12x the bet for five symbols on adjacent reels for the top symbol. Lower valued basketball sneakers pay just 2x the bet for five symbols.

Basketball Star slot game players should expect wins to come in fairly small sizes during the base game in this slot – unless they manage to land five Scatters, which pay out 250x the bet.

While players spin the reels, they might notice stacked Wild symbols spinning by on the reels. Get lucky enough to win a stack of these and you’re almost guaranteed a win. The slot game’s Wild Shot feature can also turn up to two reels Wild on any spin, which absolutely guarantees a win.

We’re also very pleased to see that the Basketball Star slot game features Rolling Reels – one of our favourite slots features. Also known as Avalanche, this means that winning symbols of Basketball Star game disappear from the reels once their wins have been counted and new symbols will roll into place, opening up opportunities for further wins on the same spin.

There’s also a Free Spins round in Basketball Star slot game which can be triggered by landing three or more Scatter symbols on the reels, unlocking 15, 20, or 25 free spins for three, four, or five Scatters. During the slot’s Free Spins, consecutive wins due to the Rolling Reels feature will also clock up multipliers up to 10x the win, which is a nice little boost.

This game’s return to player is 96.45%, a little above average compared to many other online slots. Players keen to maximise profits might find higher numbers, but for most casual slots players this is a perfectly good average return. Basketball Star slot game is also medium variance, so there’s a good balance between win size and frequency for most players here.

This is one of relatively few basketball themed slot games out there, and it does a pretty good job of recreating the fun and madness of a great basketball game. Basketball Star slot game’s features aren’t anything new, though, and the game is likely a carbon copy of many other Microgaming slots on the market featuring Rolling Reels and Free Spins. That said, it’s fun to play slot game, and if you’re into basketball and the theme appeals, you could do a lot worse than Basketball Star.

Visit Las Vegas Casino slot games page and browse across the most popular online video slots from the best game providers. Just like in Vegas you’ll get the most out of the best online jackpot slot games.