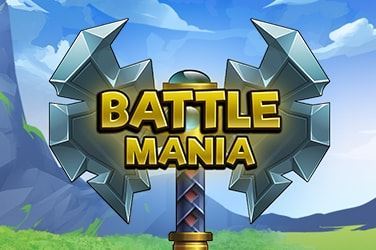 There is only one word to describe Skillzz Gaming’s Battle Mania slot game: Unique. With an RTP rate of 94.65%, win multipliers and free battles are all available in this fantasy game for Las Vegas Casino online players.

Role-Playing games have become immensely popular with many gamers over the last few decades, so it was only a matter of time that a gaming developer would look to provide online slot game enthusiasts with something that can relate to the theme.

Indeed, Skillzz Gaming have created Battle Mania, which features the graphics and visuals that would be expected when playing this genre of game online with friends and other players around the world.

The graphics of the Battle Mania slot online game are solid, as are the remainder of the visuals used, with a variety of different colours and monsters being used to highlight the battle that players will find themselves going into when they play this slot game.

Battle Mania slot online players will need to battle the enemies in front of them and reduce their health bars to zero. A team of 5 warriors will need to be picked and the formations will vary in prize potentials on offer.

Renodet the Bold is a hero that has the ability to use Double Attack, which will remove 3 spaces from an enemy’s health bar. Diabla the Necromancer is a sorceress that can cast spells that instantly reduce the enemy’s power, whilst Randolph Longtail can use his horns to devastate the enemy.

Brugnur the Dwarf has the ability to send his triple axe flying towards an enemy, whilst Miandra the Mermaid can cause a Tsunami that swipes out their foes. Each battle will see each warrior provided with cards that can impact on how many points are taken away from their opponents.

Each blow taken will provide a prize, but this can only be collected when the battle has been won. If a skull card is dealt, though, the villains will be able to attack and the fight will be lost.

There are a number of different bonus features available in this Battle Mania slot game that helps to keep things rather interesting.

These features will begin randomly when a Special Ability card is received. The further Battle Mania players get into the slot game, the more opportunities they will have to change their team formation and choose an island in which they want to fight on.

Bonus Cards trigger features such as the ‘Villains’ Wave’ which can trigger a Multiplier of up to 10x, or Free Battles can be revealed. This will see freebies and instant cash wins being rewarded.

In the ‘Lava Stones Pick Round’, Battle Mania slot players will aim to pick stones that reveal cash prizes until they pick the Multiplier stone. If the ‘Forest Card’ is drawn, the warriors will all team up and face the Boss Dragon to try and obtain 20,000 coins. Those fortunate enough to get to the Treasure Island Event will be able to go for 100,000 coins.

Skillzz Gaming have made this slot game available to play from as low as €/£/$0.60 per spin, whilst Las Vegas Casino players who prefer to wager bigger amounts are able to place a maximum bet of €/£/$100 on each Battle Mania slot spin that they take.

The game’s return to player (RTP) rate is set at 94.65%, whilst the volatility level can be adjusted by the player.

First impressions might suggest that this Battle Mania slot game is a little confusing to begin with, however it is easy to master and understand, and it can bring a completely different online slot game experience to one ever experienced before.

With up to 100,000 coins on offer, this is certainly a game worth checking out!

If you are looking to find the ultimate online casino gaming experience then you might want to browse other top online slots like Battle Mania here at Las Vegas Casino.