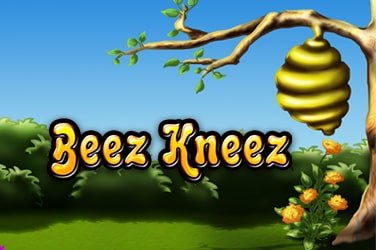 With up to 25 free spins being offered a maximum of 15 times, this Beez Kneez Jackpot online slot game from Eyecon provides Las Vegas casino with a great amount of fun.

The graphics of this game have been designed rather impressively whilst using a rather fun and cartoony vibe. The Beez Kneez Jackpot game’s background provides a crystal blue sky with a ton of green bushes and colourful flowers, as well as a branch that features a beehive, whilst the game’s playing grid features a rather bright yellow coloured theme, whilst the icons have all been drawn rather impressively and rather in a fun way.

The online slot game is played on a playing grid that consists of 5 reels and 3 rows, as well as featuring a total of 25 different paylines; all of which can be adjusted to help further enhance the gameplay experience. The video slot layers are able to choose from as low as one, or as many as 25, depending on how they want to play this Beez Kneez Jackpot slot game.

The slot players will find that there is a wild symbol, which is a cocoon, and this can help to form any wins where possible as it will substitute for all icons except for the game scatters. When it does appear in a winning combination, it will reward players with double wins.

This Beez Kneez Jackpot slot features two different scatters. The first is the same icon that is the wild and landing three, four or five of these will trigger either 15, 20 or 25 free games. Any wins that are awarded during this free spins feature will provide a reward that has been tripled. But, the free spins around can only be retriggered a maximum of 15 times.

The other scatter of the game is the bee that is hugging a pink flower, and this is called the Worker Bee Prize Pick feature. Three or more of these will need to land and players will be awarded one pick for each icon that has triggered the combination. Each pick can award a prize of up to 100x the total bet, whilst the prizes will all be added together. This feature can be triggered in both games.

Each win that is recorded will also trigger the gamble bonus, which can pay double the rewards if the outcome is predicted correctly, although this game is optional. Otherwise, Beez Kneez Jackpot players will lose everything that they had won on the last win if they incorrectly choose the wrong outcome.

This online casino game provides Las Vegas Casino players with a rather fun and enjoyable experience and one that can really lighten any mood, especially given the number of free spins that are available to play with.