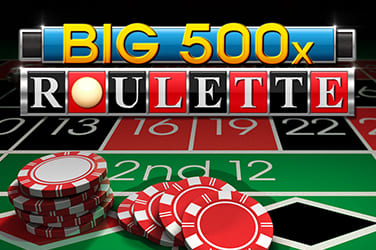 Big 500x Roulette has been created by Inspired Gaming provides players with some rather simplistic, yet effective, visuals and graphics that help to immerse Las Vegas Casino players fully into the game.

Players will notice that there is a green background that can be thought of as the felt that these games can be traditionally played on when at a physical casino, with the roulette wheel being placed in the centre of the screen and the racetrack having been provided towards the right of the screen.

This Big 500x Roulette game follows the rules of European Roulette, therefore meaning there are all of the standard bets and rules that can be followed when playing this game. This includes a single 0 and many of the other side bets.

There is also the option to quicken the speed at which this game is played, with the Turbo Spin option appearing underneath the roulette wheel, which can be handy for some Las Vegas Casino players who are keen to get as many turns in as they can!

What makes Big 500x Roulette stand out compared to the many other variations of this classic casino game available is the bonus features that this game comes with; in particular, the ability to win 500x the bet!

Players who play this game will notice that there is an extra pocket on the wheel, as well as an extra betting space that appears on the board. Whilst many may suggest that this is similar to the game of American Roulette and its use of a double 00, players in this game will be able to trigger a great bonus game instead.

There are three stages to this bonus, but players who do get through each stage will be able to take home the 500x prize! Players will be required to take it from one stage to the next, where they will have to decide on how much to bet on each of the different circles that appear on the grid.

The multiplier can be split up into the following breakdowns:

One of the requirements is that players must use the full value of whatever multiplier is left, and only one circle will be a winner. Therefore meaning it can be rather important to try and spread the multiplier out as much as possible to be within a chance of winning.

It should be noted that rounds two and three only have 2 circles to choose from, but if players lose all of their multiplier before they reach the round, they will still receive a prize of just 5x.

The return to player (RTP) rate for this Big 500x Roulette online table game from Inspired Gaming stands at 94.74% in the base game, whereas it will increase slightly to 95.39% when it comes down to the bonus game.

Indeed, this Big 500x Roulette table game from Inspired Gaming has the ability to provide Las Vegas Casino players with something rather unique and brilliant at the same time in regards to the bonus feature available.

This game will see players be able to win up to 500x their bet, if they are lucky, whilst also combining the great game of roulette in a fun way!

Try this table game at Las Vegas Casino now! Have some fun and may luck be with you.