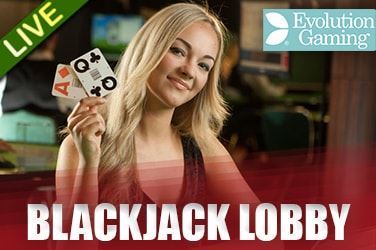 Fast and fun, there’s a reason that live dealer blackjack is so popular. We’ll be reviewing Blackjack Lobby by Evolution Gaming to see just how it measures up as a live dealer game. Read on for our full Blackjack Lobby review where we’ll be covering the gameplay, RTP, its mobile compatibility and more.

First things first, Blackjack Lobby is a live game which means the gameplay mimics that of a physical casino. The game is broadcast using a live video stream where a real, human dealer will manage the game and deal the cards. Players will be able to see the cards that are dealt and interact with the croupier, all while placing real money bets online.

While playing live on Blackjack Lobby we found the croupier was incredibly polite and friendly with an extensive knowledge of the game. Players are able to interact with the dealer directly using a live chat feature, which they can reply to using a microphone. In addition, we found the video quality was impeccable and likely shot using an HD camera. As far as live blackjack games go, Blackjack Lobby really has everything covered.

One of the many perks of playing a live dealer game is that there’s no random number generator involved. Instead, players rely on the human dealer to deal the cards and manage the game. In turn, this means that Blackjack Lobby live casino title by evolution gaming has the same return to player (RTP) value as any other standard game of blackjack – 99.41%. Remember, this value does not indicate the probability of a pay-out but instead shows how the game is expected to perform over an extended period of time.

Blackjack Lobby is powered by Evolution Gaming – one of the most reputable casino game developers in the world. Evolution specialise in live dealer games and offer the largest selection of dedicated tables around. The reputation of Evolution means that they attract some of the best croupiers too – players will find that the live dealers themselves are friendly, interactive and hugely knowledgeable of the game. When it comes to a live dealer game, Evolution Gaming really can’t be beaten.

Blackjack Lobby is perfect to play on mobile. We tested the live casino game across iOS, Android and Windows devices and found it worked smoothly across all three software providers. The mobile game has all of the same features as the desktop version including the live chat feature and high-quality video stream. To play, simply log-in using your Las Vegas Casino account and stream the game using a strong Wi-Fi connection.

Overall, we really couldn’t fault Blackjack Lobby. The live game will appeal to experienced players looking for a taste of life at a real casino as well as newer players looking for something fun to try. The game works seamlessly on mobile devices and is broadcast in HD, not to mention it’s powered by Evolution Gaming – one of the most reputable developers in the industry. Sign up to Las Vegas Casino today and try out Blackjack Lobby for yourself.

You might want to check our glamorous Live Casino page if you are seeking the thrill of the glitz of the land based casinos. We guarantee you the most sought after selection of live dealer games.