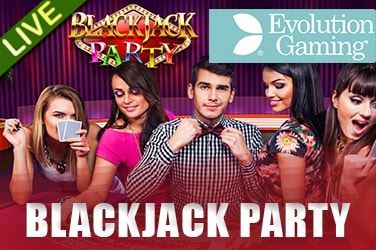 If you are into online gambling and playing classic casino table games with a live dealer, you will love Blackjack Party from Evolution Gaming. It’s similar to Live Blackjack, but with a party atmosphere. The betting rules are the same, but with Blackjack Party, the live dealers don’t just deal, they are there to entertain.

The Origins of Blackjack Table Game

Blackjack is believed by many to have originated in the 1700s in casinos in France. They called the game “Vingt et Un,” French for twenty-one. There is an alternative theory that the Romans invented Blackjack. In those times they would have played the game with wooden blocks, each with different numbers on them, rather than with paper playing cards.

Fast forward to the 21st-century, and not only are we still playing Blackjack, but it’s been developed into a live dealer game that anyone can play over the Internet, like Evolution Gaming’s Blackjack Party table game.

Evolution Gaming are world leaders when it comes to creating live dealer games to play at online casinos. They work with more top-tier gambling brands than any other game software designer and they lead the way in live casino B2B services. They were originally founded in 2006, and as soon as they came on the scene, they revolutionised European live dealer platforms.

The setting for Blackjack Party online table game is a seven-seater, live card table, with plenty of room behind the chairs for others to spectate and take part in betting if they so wish.

Blackjack Party online table game is streamed from Evolution’s disco-themed studio in Latvia. It’s a superb setting full of iconic disco-related elements. It delivers a lifelike party atmosphere that can be enjoyed by players on all devices, including mobiles. There are several camera angles granting players a complete view of the action as it unfolds.

With its seven-seater table and bags of room for players to stand behind the chairs, tables never become fully booked, making it possible for anyone to join in the party.

In this variant of the game, the live dealer stands on 17. Hands can be split, but players are only able to do so once. Doubling down is permitted on the first two cards dealt. Bet-wise, the game has some interesting side-bets including 21+3, and Perfect Pair. Both of these wagers can be quite lucrative. They can payout up to 25:1 and 100:1 respectively, regardless of the outcome of the main game.

The party fun going on behind the online table game is live-streamed in full HD. It creates a whole new dimension and raises the game higher than anything else offered by competitive game designers. With live interaction between blackjack players and live dealers, plus CGI elements to highlight certain features of the game, and an RTP of 99.64%, Blackjack Party will keep avid online gamblers coming back for more and more.

Blackjack Party transports you into a real casino. Watch the interaction between players and dealers in HQ and place your best bets while having a nice social experience.

Find more of the best games like this in our selection of online casino slots and table games  here at Las Vegas Casino. Put your tuxedo on and walk through our casino pages in the comfort of your home but the same excitement of Vegas.