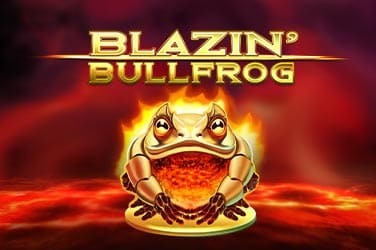 Blazin’ Bullfrog is a 5 by 3 videoslot with 243 ways to pay (win lines). Play‘N Go has taken their famous fire toad on to the next step and it’s even hotter than before, what comes in a classic style slot machine.

The Blazin’ Bullfrog slot is the sequel to Fire Toad. The story is that the powerful Fire Toad retires to the Gold Volcano to spend its final days as a Blazin’ Bullfrog. However, and given the game’s name, you might expect jungles and swamps to be the setting here.

Instead of nature dominating the reels, it’s shimmering gemstones. The design is simple, clear and crisp. It’s not what you might expect from a slot called Blazin’ Bullfrog but it’s decent enough.

Symbols include lower value green, red, purple and amber jewels. They’re joined by a turquoise lucky 7 and a gold bar. The gold bar is the most lucrative standard symbol. Land 3, 4 or 5 of these on adjoining reels for a payout equal to 1, 2 or 3 x your total stake.

The Frog with the ‘W’ symbol is the games wild, which also expands to cover the reel.
It doesn’t just replace any other symbol it also brings and added feature, Respins.
The respin feature locks the triggering wild on its reel, and then spins the rest of the columns. If there are additional expanding wilds which land then, the respin feature continues. At most, you can have 3 respins, and 3 expanding wilds on the middle reels.
Sound familiar? It should be as it is very similar to the popular slot game Starburst, but this slot is more fun.

Feel the burn and leap-frog yourself into exciting gameplay and exciting wins available now at Las Vegas Casino.