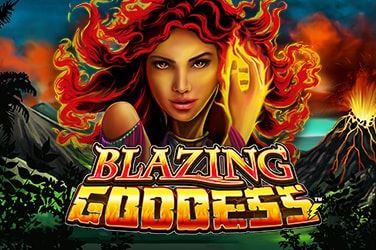 A total of 30 free spins can be won in this Blazing Goddess online videoslots whilst Las Vegas Casino players can also look to further increase any wins they have by utilising the gamble feature that is available, as well!

Players will be taken to a tropical forest in this Lightning Box Gaming Blazing Goddess online slot game with some impressive graphics having been adopted.

Players will be able to see a hut in the bottom left-hand corner, whilst there are a number of palm trees, and what appears to be statues that would be seen on Easter Island poking from the right.

The Blazing Goddess paytable features a number of different symbols that have been expertly drawn, including the traditional royal card playing icons. Furthermore, there are a number of colourful flowers, a toucan, a volcano, as well as a fire master.

Players who play this Blazing Goddess online slot game will find that there is a playing grid that consists of 5 reels and 4 rows, as well as a total of 1024 ways to win.

A couple of bonus features available in this Blazing Goddess online slot game with the free games round perhaps the best available.

Players who land three scatter icons will trigger six free spins, whilst four icons will award 15 free spins. Those players that are able to land five scatters across the playing grid will receive 30 free spins.

During this free spins game, players will notice that more wilds are added to the reels, thus providing them with more opportunities to win bigger, as more winning combinations can be formed.

Each time a win has been achieved in this Blazing Goddess online slot game, players will also be able to take advantage of a ‘Gamble’ feature. Players will need to either select red or black or pick a card suit. If they pick the correct colour, they will win a prize that is doubled their payout, while a correct suit will see a prize be quadruple the original amount. However, like many other gamble features, picking an incorrect choice will see the payout lost.

The return to player (RTP) rate for this Lightning Box Gaming Blazing Goddess online slot game is 95.38% and features a high volatility level.

This Blazing Goddess slot game title from Lightning Box Gaming has all the potential to provide Las Vegas Casino players with an epic gameplay experience as they are able to obtain a large number of free spins, whilst also gamble their winnings and achieve rewards of up to 4x more than they initially were!

With a maximum bet of €/£/$500 allowed on each spin, as well as an RTP rate of 95.38%, players will feel that they could line their pockets with some tasty rewards!