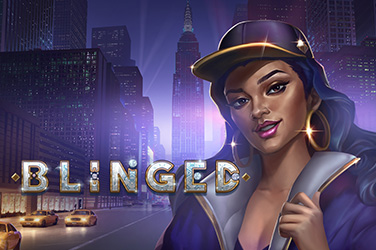 Blinged is a Videoslot from Play’n GO which has a hip-hop theme and is therefore quite over the top and exciting to play, where you can potentially get some bling in the form of big rewards as well!

As mentioned, the game has a hip-hop theme, with the focus being a girl group of rappers who are intent on making it to the top.

This leads to the name of the game as well as the overall appearance of ‘bling’, with some shiny symbols and icons in the game, while the graphics and animations are also suitably jazzed up, along with a catchy soundtrack that lives up to the theme as well. The background of the reels seems to be a street in the Bronx neighbourhood of New York City, with this area also being renowned for producing a lot of hip-hop artists, and therefore this ties into the game’s theme as well.

The various symbols on the reels include the standard card royals from 10 to A, while the themed symbols include a wad of cash, gold sneakers, a bling ring, a trio of girls and a girl rapper, while the game’s wild is also a female rapper with a ‘Wild’ hat on.

This game has a 5×3 grid with 10 paylines. Players get wins for landing three or more matching symbols on a payline, while there is an Autoplay feature as well which can allow you to spin up 100 spins automatically.

This feature stops when you trigger a bonus feature, or upon hitting a pre-decided profit or loss limit. You can also choose to apply a single win limit as well.

The diamond icon is the game’s Scatter which helps trigger the bonus features. Landing two of the diamonds on the reels will trigger the respins round, where you will get continuous respins till you land a winning combination, with the multiplier also increasing by 1 for every respin. During this round, you will also get 1 Win Spin.

Landing three of the scatters will take you to the Win Spin round directly. Here, you get five spins, with each non-winning spin triggering a respin with increasing multipliers until you land a win, while if you land a scatter on the reels during this round, you get an extra spin. It must be remembered that the scatter only lands on reels 1, 3 and 5 in the game.

This is a game with a very interesting theme, which slot fans can try out at Las Vegas Casino now!