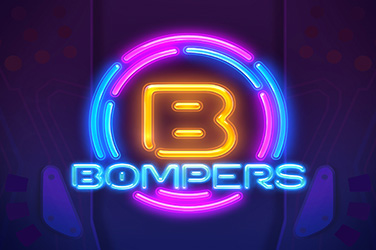 With an array of different special bonus features available including a free spins round, Las Vegas Casino players will be able to experience something a little different with ELK Studio’s Bompers online videoslot game!

Bompers online videoslot provides a rather futuristic and unique theme, as the purple shines brightly off the game’s background.

Furthermore, there are a number of cool animations that happen throughout this online slot game, that helps to bring it to life. Bompers is a lot of fun.

In regards to the symbols provided, ELK Studios videoslot game provider have decided to go down the more traditional route by using some classic fruit machine icons, although they have provided them in a way that is rather different.

Bomper’s icons are represented by things such as cherries, lemons, oranges, watermelons, four-leaf clovers, horseshoes, a bar symbol and a red seven. They all appear in circles, which will drop down and land in certain areas of the grid when spaces appear.

The playing grid is far from traditional, however it does feature six reels.

Because of the way this Bompers online videoslot has been set up, there are a total of 262,144 different paylines available to win from when winning sequences have been formed.

There are a number of reel modifiers available in this Bompers online videoslot that should make Bompers appealing to Las Vegas Casino players.

In Bompers videoslot these can be found in the form of the special symbols that are available, with each having the potential to become wild. Once their meter is filled, videoslot players will find that these icons become sticky and will remain on the grid as the cascades continue to take place on a single winning spin.

Mystery bombs are also available which will explode at the end of a spin and turn each icon surrounding it into the same icon. A shooting star icon will form groups of icons above the current set, as well.

There is a free spins game available in this Bompers videoslot. Known as the ‘Free Drops’ bonus, Bompers players can trigger it when 3 bonus icons appear on the reels. A further 7 free drops will be provided, with sticky wilds remaining in place for the duration of the game.

Furthermore, in Bombers videoslot there is a ‘Bonus buy’ option available that is called an X-iter and this will provide the following options:

Furthermore, Bompers return to player (RTP) rate stands at 95.7%, and that comes with a high volatility level. This means prizes can be rather infrequent, but they can be rather large when they do occur.

Whilst ELK Studio’s Bompers videoslot is a little different compared to many other titles available, it will still provide Las Vegas Casino players with a truly enjoyable experience and one that can be rather fruitful if all of the special bonus features work together!