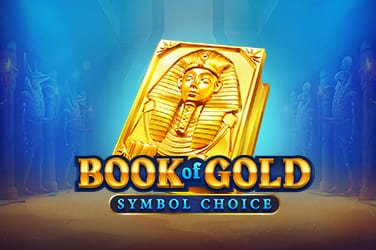 Egyptian themed online slot games are always extremely popular, and Book of Gold: Symbol Choice slot game, from Playson has the potential to become another classic of this genre.

Book of Dead, the classic slot game that has been the trendsetter in this genre for years, has definitely inspired this game as well, as we see quite a few similarities to that slot game here. The reels are set against the backdrop of the pyramids, while they have a gold border to further emphasise the theme. There is an interesting and enigmatic soundtrack that plays as well to bring this ambience to the player.

The standard Ace to 10 card royals are accompanied by themed symbols, such as the ankh cross, eye of Ra, Book of Gold, Anubis and the Pharaoh himself. Of these, the pharaoh is the most valuable, paying out 500x for landing five of the symbols on a payline.

The online slot game is set in a 5×3 grid with 10 paylines, where winning combinations are achieved if you land matching symbols from the leftmost reel onwards, with a minimum of three needed. Full combos require landing five matching symbols, and can pay out 10x to 15x for the low-value card royals, and 75x to 500x for the themed premium symbols. The Book of Gold is the slot game’s Wild and Scatter, and plays a major role in the bonus rounds, while also substituting for regular symbols when it lands on the reels.

Landing at least three of the Book of Gold icons triggers the Free Spins round. You get 10 spins to start the round. Before the round starts, you have to choose a symbol which will be the expanding symbol on the reels whenever it lands during this round. This symbol will expand to cover the reel whenever it forms part of a winning combo in this round, while these wins are paid independent of paylines.

This round can be retriggered as well in the same manner up to 4 times, thus giving you a total of 50 free spins potentially to be won.

Book of Gold Symbol Choice is another in the line of slot games that are based on Ancient Egypt, and there are several opportunities here for you to pick up some fabulous treasure of your own. Check it out at Las Vegas Casino today!