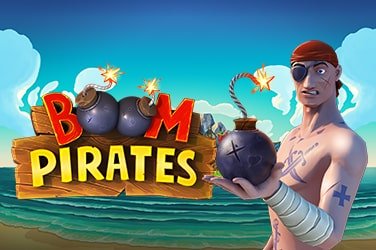 Foxium’s Boom Pirates does justice to an age old classic with many modern features. Its revolutionary Wonderways mechanic allows it to have between 1024 to a remarkable 10,077,696 ways to win the game. This is a feature that is especially attractive to all types of players.
You are immersed into Captain Mary’s world consisting of 5-9 reels and 4-6 rows. This slot game does not have any wilds, but works wonders through its expanding reels, random features and scatters. Boom Pirates has dynamic features that make for a unique gaming experience.

Though maybe not the best in the industry, Foxium are surgically effective in their execution of the slot’s graphics, theme, colour palette and animations. The background displays a ship that is ready to set sail for raid.

Further, the symbols in Boom Pirates slot game are quite consistent with the atmosphere created by the developer. Some of these include, gunpowder barrels, canons and parrots. Overall, considering the dark background in conjunction with brighter colors on the grid, Foxium do a solid job of doing justice to a fairly common theme.

The betting range of Boom Pirates slot is between 0.10 to 30 credits. This is not particularly broad but is extremely accessible to all types of players. Like any other slot machine format, the objective of the online slot game is to obtain a combination of a certain amount of similar symbols in order to yield payouts.

The Foxify feature interestingly increases your chances of landing free spins. However, note that your bet gets increased by 50% for it to initiate.

Furthermore,Boom Pirates slot game has a boom pirates feature which triggered randomly. Once initiated, the pirate ship in the background fires cannons onto your reels that in turn expand. The players have a chance of increasing their ways to win through this.

Moreover, this slot has a Mary Swashbuckling Attack feature where the Captain herself appears after a non-winning spin to give the player a 5 of a kind win. This feature is randomly activated as well.

Finally, Boom Pirates’s free spins feature is quite rewarding. For instance, if 3 scatter symbols fall on reels 1, 3 and 5 simultaneously, 10 free spins are awarded.

The return to player (RTP) of Boom Pirates is 96.19%. This means that theoretically, a player wins an average of 96.19 for every 100 bet made, Note that this average is a cumulative of over 4000 attempts.

In addition, the Boom Pirates slot’s volatility and variance is medium.

Foxium’s Boom Pirates has an outstanding ‘open’ game format with an exceedingly large number of ways to win. This in conjunction with an immersive experience amount for a truly remarkable gaming experience that gives boom Pirates a high replay value.

Try amazing online slots like this at Las Vegas Casino