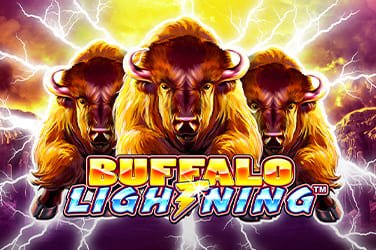 Skywind’s Buffalo Lightning slot game features 243 paylines as well as an RTP of 96.71%, which will certainly appeal to Las Vegas online casino players.

As soon as this Buffalo Lightning is loaded up, players will be met with a background that can be interpreted as if players are within the mountains as there is a thick blue sky with a cloudy background, as well as a number of rocky tops that appear from the bottom of the screen.

The icons have been provided in a rather great design that consist of a number of vibrant colours. Buffalo Lightning players will find that there are the traditional royal card playing symbols, as well as a number of animals that could be related to the North American region. These include what appears to be a beaver, a ram, a wolf, an eagle and the buffalo.

This Buffalo Lightning video slot game is played across a total of 6 reels and 4 rows, and features a total of 243 different paylines. Players will simply need to form winning combinations of 3 identical icons or more to trigger a payout.

Furthermore, there is a game panel at the bottom of the screen that can help to further enhance the gameplay experience felt throughout Buffalo Lightning slot.

This Buffalo Lightning online slot game features a number of special bonus features, including a scatter symbol that helps to payout rewards, regardless of where it lands on the reels as long as three or more land. Players will be able to receive a payout of either 1x, 2x, 10x or 100x the stake.

The scatter icon, which is represented by the golden buffalo coin icon, also can trigger the free spins round available in this online slot game. Players will need to land either 4, 5 or 6 of them though, but they will receive a total of 10, 25 or 100 free spins.

When the free spins round is triggered, players will notice that they are given multiplier wilds to help boost their wins by either 1x, 2x 3x 5x or 8x the bet. If players land more than one of these multiplier wilds, they will see their prize multiplied together to give a top potential of 33x the bet.

Skywind have provided this online slot game with a return to player (RTP) rate of 96.71%, although players should note that this online game is highly volatile.

All in all, Skywind has provided a rather fun online slot game that is incredibly simple and entertaining to play.

This Buffalo Lightning video slot has a brilliant free spins bonus round that is coupled with the win multipliers to help players win some rather big rewards when their luck is in.