Bull in a China Shop Slot 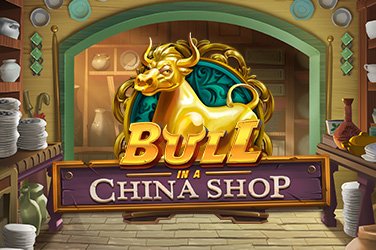 Bull in a China Shop online slot game from Play’n GO consists of 3 special bonus free spins rounds, as well as a Wild Bull that helps to make this game rather exciting for Las Vegas Casino players.

Bull in a China ShopTheme

Play’n GO are known for their great visuals and this continues with this Bull in a China Shop video slot game, as they have provided some high quality graphics.

The developer appears to have used a Chinese theme, as players will notice that many of the visuals used appear to fit that theme, including the icons on the paytable as each of them all represent an oriental theme.

There are a number of different objects on the paytable, including traditional playing card suits, as well as oriental forms of pottery, and a Chinese lady.

This Bull in a China Shop video slot game features a playing grid that consists of 5 reels and 3 rows, as well as a total of 20 fixed paylines.

Players are able to make the most of a game panel at the bottom of the screen, which can provide them with a number of customisable options, such as the bet values being used and the auto spins function.

Play’n GO are known for packing their online slot games with a number of bonuses and features and Bull in a China Shop features a number of them.

The first that players may come across is the Wild Bull symbol, and this can appear in any position on the playing grid. As other wilds normally do, he can substitute for all other icons and create potentially helpful wins. However, he also has a special bonus of being able to trigger one of three random effects.

The first will see him place between 2 and 6 wild symbols on the reels, whilst he can also turn up to 5 reels wild or add between 2 and 6 2x wild multipliers to help boost wins that may occur.

Play’n GO have also provided 3 different free spins rounds, which can be triggered when the Golden Bull statue scatter icon appears on reels one, three, and five. Players will get to choose from one of three different free spin bonus rounds and will have 10 Free Spins regardless of which one they choose.

Happy Free Spins will see the Wild Bull provide extra non sticky wilds when he appears, and it is then possible for up to 14 of them to be added to the screen.

The Proud Free Spins game will see between 1 and 5 reels transformed into wild reels when the Bull icon appears.

The Angry Free Spins will see the Bull provide anywhere from 2 to 14 multiplier wilds, when he appears on the reels.

Players are able to retrigger this special spins bonus by landing an extra 3 scatter symbols on reels one, three and five. However, it can only be retriggered once.

Play’n GO has provided a return to player (RTP) rate of 96.2% for this Bull in a China Shop slot game, and a medium volatility level.

Play’n GO are no strangers in providing some fun and quirky titles when producing games, and this Bull in a China Shop online slot certainly fits that narrative.

Players will love the 3 different free spins bonuses, as well as the special features that the wild icon creates.