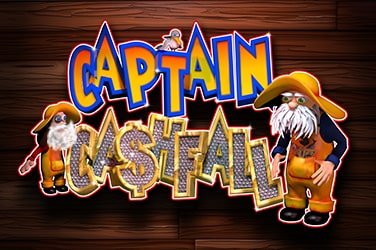 Core Gaming are a well-renowned games developer with a big following in the online casino slots community. You will find many of their games in the comprehensive catalogue of slot titles available on the Las Vegas casinos site, including this entertaining nautical-themed game.

Captain Cashfall slot game is a fun online casino game based on a nautical theme. It has 5 reels and 20 paylines and among other features includes stacked Wilds free spins and an entertaining mini-slot feature. It also gives you the chance to land a huge prize with the game’s progressive jackpot, and it is playable for between $/£/€ 0.2 and $/£/€ 500 per spin.

The design on show in Captain Cashfall slot game has a cartoon style and it has been nicely realised. As ever you will find the usual card values representing the least important payouts and you will also find a fishing rod, a blue fish and a ship’s wheel on the reels. The most valuable symbol is the Captain Cashfall logo and if you can land five of these icons on one pay line you will earn 25 times your stake.

Another symbol to look out for in Captain Cashfall slot game is the Tin of Tuna. This represents the Wild and when it comes up on the third reel it expands to fill the whole of the real. As well as the base game this is a slot title that gives you plenty of chances to land a big catch.

The game offers plenty of bonus features including the handy Fishwife Free Spins feature. In this bonus game if you can land three or more of the scatter icon you will earn up to 30 free spins. With each free spin, the central position of reels two and real 4 will be wild and if the wild also lands on the third reel it will then expand to take up the whole of the reel as in the base game.

Sea Dog Super Slot is another useful bonus feature in Captain Cashfall slot game. In this case the game is triggered when you land three Sea Dog scatters on the middle three reels. Next, you will be asked to make your choice from a Pick ‘Em round which will give you up to 10 free spins, and if you can land three identically coloured fish you will create another winning line and a payout.

The bonuses don’t stop in Captain Cashfall slot game. You may also be lucky enough to launch the Lobster Pot Shot feature if you can land three Captain Cashfall scatters across the odd-numbered reels. In this slot game you open a chest of treasure which will show a bronze, silver or golden lobster or a cash prize. And if you can land a trio of the same coloured lobster you will land the relevant jackpot prize.

Last but not least there are the Captain Cashfall online slot most impressive features: the three progressive jackpots. These are launched if you can bring up a winning combination that features the correct coloured backdrop. If you can light up the whole of the trail that is on the right hand side of the reels you will trigger the jackpot round and potentially a huge prize.

Captain Cashfall slot is a graphically simple game but the theme is attractive and the gameplay is nicely realised. Best of all, it is packed with bonuses and features and the chance to land a huge jackpot will prove a big incentive for many slots players.

Find more of the best slot games like this in our selection of online casino slots and table games are here at Las Vegas Casino. Put your tuxedo on and walk through our casino pages in the comfort of your home but the same excitement of Vegas.