Cashzuma And The Tomb Of Wonga 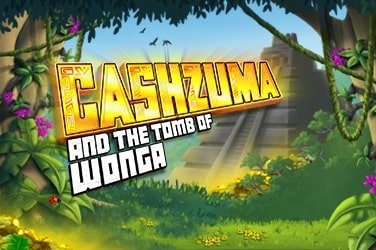 Cashzuma And The Tomb Of Wonga Slot Gameplay

In Cashzuma and the Tomb of Wonga slot game, the reels are set to a background of a South American rainforest, with the base symbols represented by the playing card numbers 9 to Ace that sport an Aztec style in keeping with the overall theme. In this slot the higher value symbols are represented by red, green and blue precious stones and Cashzuma, with six Cashzuma symbols on a payline offering a win of €/£/$50.

Cashzuma and the Tomb of Wonga slot game is listed as having a volatility that is medium to high, offers a jackpot of €/£/$250,000 and has a Return to Player of 96%, which is on the high side of average for this type of online slot game. The minimum stake is 20 cents with a maximum bet of €/£/$20.

Aside from the 4096 different winning combinations, Cashzuma and the Tomb of Wonga slot game also offers a Cascading Reels feature during the base gameplay, which is when any winning symbols are wiped out and replaced by other symbols cascading down from above. Hopefully,  those new symbols will also match the remaining symbols to create even more winning combinations, which could create a chain reaction that provides multiple winning combos.

Cashzuma And The Tomb Of Wonga Slot Game Bonus

The WILD symbol will replace all of the other symbols on the grid with the exception of the BONUS symbol to help create some winning combinations. But in Cashzuma and the Tomb of Wonga slot game it is the bonus symbols that you need to watch out for as these will trigger one of two different free spin feature games if you land 3 or more on a payline.

Cashzuma And The Tomb Of Wonga Featured Slot Bonuses

When you land 3 or more bonus features you will be sent to the mystifying Tomb of Wonga, and here you will get the choice of two free spin features. Choose from the Lunar Wild Eclipse Free Spins feature or the Multiplying Spirits Free Spins feature, with the more bonus symbols you land to trigger this feature giving you more free spins during this round.

In Cashzuma and the Tomb of Wonga online slot, The Lunar Wild Eclipse works by landing Lunar Wild Symbols randomly on the two middle reels only. When these symbols appear, they become sticky and will stay in situ for the entire duration of the free spins round, and they will substitute for all other symbols apart from the bonus symbol to create winning combinations.

The Multiplying Spirits feature has the potential for huge wins thanks to its cascading reels. There is a multiplier counter that starts at 1x, and any wins during this round are multiplied by that amount, but the great thing is that for every cascading win the multiplier counter will increase up to a maximum of 100x. In Cashzuma and the Tomb of Wonga slot  there is the potential to land some sizeable winnings during this feature.

Cashzuma and the Tomb of Wonga slot game is certainly a colourful and fun gaming experience, although the base game can feel a bit light on thrills, but the fun really starts when you enter the bonus feature rounds as there is the potential for some big profits to be made.