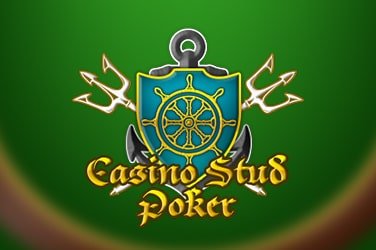 This Play’n GO’s online casino game provides Las Vegas Casino players with the opportunity to play against the dealer with an RTP rate of 94.78%.

The Swedish developers do not usually hold back when it comes down to the graphics and visuals departments, although there is perhaps not too much they could do with this Casino Stud Poker casino video game.

Players will find themselves appearing to sit at a classic casino table, which has been given a green felt finish and one that would not look out of place in a traditional casino. Players will be able to see a blue deck of cards, as well as the chips that they can use when making their bets.

Otherwise, there is not too much else that can be seen, although that should not come as a surprise.

Playing this Casino Stud Poker video game is as easy as possible to play and follows the traditional rules that can be found.

Throughout the Casino Stud Poker video poker game, each player will receive a total of 5 cards. Once these have been dealt, bettors will need to choose what to do with their hand; Call or Fold. Players who fold will lose their Ante bet as well as the optional Jackpot bet.

There are not too many bonus features to talk about with this Play’n GO Casino Stud Poker video game, although there is one that Las Vegas Casino players should make themselves aware of when playing this game.

If the dealer qualifies for a hand, both hands will be compared. If the hands are the same, a push will be determined to be the outcome, which will see the player have their Ante and Call bets returned. However, if the dealer’s hand is better, then those will have been lost.

Play’n GO have made this video poker game rather appealing as they have provided it with a return to player (RTP) rate of 94.78%. Although Casino Stud Poker’s RTP could be considered to be a little below average, it is still a great rate for a game of this type.
Players are able to place bets from as low as €/£/$1 and can stake up to €/£/$101 on each bet that they want to take. Be mindful that calling will see the bet size double.

Players who enjoy playing Casino Stud Poker will love this simple video poker game from Play’n GO as it is as easy to play as the traditional playing card game is.

With an RTP rate of 94.78%, Las Vegas Casino players will be able to pick up a number of wins when playing against the dealer.

Casino Stud Poker is just one of the great video poker and table games available at the ultimate online casino experiences you can have at Las Vegas Casino right now!