Charlie Chance In the Hell to Pay Videoslot 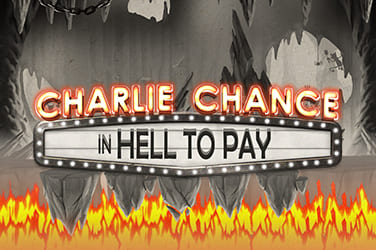 This Play’n Go’s slot will provide numerous bonuses such as a free spins game, whilst also offering an RTP of 96.23%.

Charlie Chance in Hell to Pay online slot game is a title that has been provided by Play’n Go and is one that has a number of incredible graphics and visuals attached to it.

Las Vegas Casino players will feel as though they have been transported back to the 1920s as they will be able to see a black-and-white film being played out in the background of this game, with each of the characters having been designed with some top quality drawings and animations.

The icons on the grid all come of a classic variety, with traditional fruit machine icons such as cherries, lemons, apples, grapes, a BAR icon, a 666 icon and a pair of golden bells complete the line up available on this Charlie Chance in Hell to Pay slot game paytable.

In addition, there are a couple of wilds that can appear, with each of them coming with flames, whilst there are additional bonus icons!

The playing grid in this Charlie Chance in Hell to Pay online video slot game also represents a classic fruit machine feel, as Las Vegas Casino players will find that this Play’n Go title is incredibly simple to play and follow.

There are just 3 reels that are available to play on, with each consisting of 3 positions in which the icons can appear. A total of 5 paylines have also been provided for those who form winning combinations, thus keeping the overall gameplay experience as easy as possible.

Of course, there are a number of Charlie Chance in Hell to Pay bonus features available in this game, as there are some great bonus icons that are available to collect on the playing grid when the reels are spun.

The she-devil is crucial to triggering some of these features, as the icon will attach itself to the regular icons on the grid when she appears. When three of these appear, players will then have the chance to spin a bonus wheel where they will win on of the following Charlie Chance in Hell to Pay bonuses available:

A cash payout of a random value

A win spin that guarantees a win will be made

Those Las Vegas Casino players who manage to win the free spins game will be rewarded with 8 free spins. If they are able to land more scatters during this game, they will be able to retrigger the bonus wheel for more great prizes!

The return to player (RTP) rate for this Charlie Chance in Hell to Pay online video slot game has been set at 96.23% and comes with a medium volatility level.

Furthermore, Play’n Go have made this title available to play with a minimum bet of €/£/$0.10 per spin, whilst the maximum bet that is allowed to be made on each spin made is €/£/$100!

Fans of 1920s slapstick might like this game but Las Vegas Casino players will certainly love this Charlie Chance in Hell to Pay online slot game as it provides them with a number of opportunities to win some big rewards.