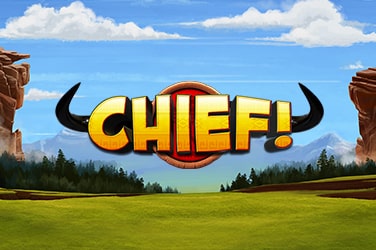 A free spins game is just one of the Chief bonus features that are available in this Inspired Gaming Cheif title that is available to those playing at Las Vegas Casino.

Inspired Gaming will take players to the Native American era with their Chief online videoslot game.

Whilst incorporating some rather fun graphics, players will notice a teepee tent in the corner of the grid, as there are also a nice number of colourful visuals.

When exploring the paytable of this Chief online videoslot game, players will be able to find a range of different icons that can be featured and closely associated with the theme. These include a couple of axes, as well as a buffalo skull, and a dream catcher, whilst the teepee tent also exists, as does a couple of different buffalo.

The game’s logo also appears, whilst the wild is a Native American piece of headgear.

There are a total of 5 reels and 3 rows for this online videoslot game, whilst this Chief title also features 20 different paylines that Las Vegas Casino players can try and form winning combinations on.

The first is via the wild icon, which will be able to help form additional wins via a method of substitution when it appears on the reels.

There are, however, a large array of Chief bonus features available to those that are able to trigger any of them, including reel modifiers. These include the following:

‘Wild Winner’ – which will trigger at random and can happen on any spin and will see the Chief appear and fill the reels with additional wilds.
‘Big Win’ – this bonus can be randomly activated at any time and will place a large block of the same symbols to the reels.
‘Stampeding Buffalo’ – A stampede of buffalo will run across the grid and boost the chances of triggering a bonus.

The ‘Buffalo Bucks’ feature is available to select when the Cheif Bonus game has been triggered, via the use of three Bonus icons that appear on the reels in one spin. This bonus game will require players to load as much luggage as possible on the buffalo before it bucks and gets it all off. The more luggage placed on its back, the bigger the cash reward.

‘Buffalo Drops’ is another game that is available to choose from when three Bonus icons appear, and players here will need to try and herd their animals across a river that is being rather vicious. Those that manage to herd the most animals will win the biggest rewards!

A ‘Free Spins’ game can also be chosen, with players obtaining 15 free spins and the chance to land some additional multiplier wilds in the process.

The return to player (RTP) rate for this Chief online videoslot game stands at 95%, whilst Inspired Gaming have failed to release what the volatility level of this game is.

With so many great Chief bonus features available, the potential to win some big prizes on this Chief videoslot game is simply amazing, with so many of them being rather rewarding when played successfully!