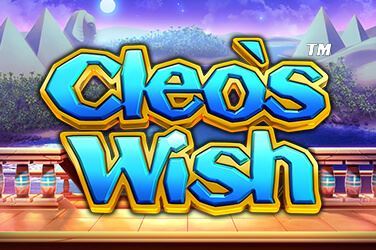 Cleo’s Wish online slot game features some rather impressive graphics, and visuals as players will feel as though they are overlooking a golden horizon with this NextGen Gaming videoslot. There is a deep blue crystal clear river that can be seen that parts some truly spectacular environment with pyramids also featuring in the background, as this Egyptian-themed game provides a fun feel over a clear backdrop.

There are a number of different symbols available on the paytable of this online slot game, including the traditional royal playing card icons, as well as some artefacts that can be found in the Egyptian period of history.

Cleo’s Wish online slot game features a playing grid that consists of 5 reels and 3 rows, and has a total of 25 paylines.

There are a number of different bonus features available in this Cleo’s Wish online slot game with the scatter icon providing players with the chance to take part in two different free spin bonus games.

The first is the Cleo’s Parade game, and this can be triggered when players land three scatters. Here players will be awarded with an unlimited number of free spins, with the first of them featuring a stacked reel of wilds on reel five that move along with each subsequent spin to the next left reel. Any of the other reels can also land stacked reels of wilds, which will also move left.

If three more scatters appear during this game, another reel of stacked wilds will appear on reel five, thus continuing the feature. This bonus game will only end when no more stacked reels are held on reel one.

The Internal Riches online bonus game will provide players with either 5 or 10 free spins, and will see any wild that appears to be added to the Super Spins Multiplier that can provide a maximum multiplier of up to 20x the bet. Any scatter icons that appear will add three to the Super Spins spin meter. This meter will then be played out after the standard free spins game, and any wins that have been awarded will be multiplied by the total Super Spins Multiple that is available.

The Sands of Fortune bonus game is a random bonus that will allow any of the following symbols to appear as the same icon when they land. This includes the Ankh, the Scarab, the bracelet and the logo.

The last of the bonus features in this Cleo’s Wish online slot game is the ‘Wish Upon A Wild’ game, which is a two-part random bonus. At any time, Cleo may wave her magic wand and either make one reel a guaranteed wild reel, which means a wild will definitely appear, or she will just randomly add a wild anywhere to the screen.

The return to player (RTP) rate of this Cleo’s Wish online slot game stands at 95.15%. However, it comes with a medium volatility level.

With the vast number of Cleo’s Wish bonuses features available, this game has the potential to provide Las Vegas Casino players with a memorable gameplay experience and one that can see big wins be provided!