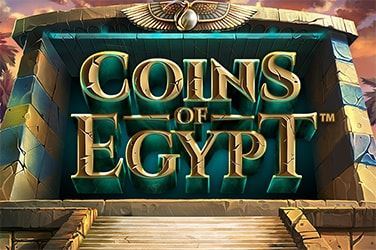 Ancient Egypt is a source of fascination, from the pyramids to Cleopatra, and it has proven a popular subject for slot games. One of the latest examples of the ancient Egyptian slot sub-genre is called Coins of Egypt, but players will be hoping for coins of the realm when they give it a spin.

Coins of Egypt Background And Gameplay

This slot game follows the five-reel, twenty pay-line format and is the creation of Net Entertainment, a name that will be well-known to fans of casino games. The company opted to limit the initial release of it, back in 2017, before putting it into general release the following year, but this tactic of whetting the appetites of slots fans doesn’t count for much unless it is the real deal.

The first thing you will notice when you fire up the game is the outstanding graphics. They pitch you onto the steps of a stone temple, with the god of the dead, Anubis, on one side of the board and the god of the sky, Horus, on the other. The reel icons are set within stone slabs and include the Egyptian gods and goddesses Bastet, Isis, Wadjet and Anubis alongside scarabs, a scorpion and a ball filled with light. This vivid imagery is supported by stirring music straight out of an adventure movie, and the combination is impressively immersive.

Betting And Winning In Coins Of Egypt

The aim is to get a matching line of five icons and Isis is the deity that really delivers – five of this goddess will win you 75-times what you bet! There is also a Wild icon to help make up a winning row; in this case, it is the gold-coloured scarab. Should you be lucky enough to get five of those in a line, you will scoop the jackpot of 3000 coins.

There are two bonus features to keep an eye on if you want to win big time, the first of which is called Pharaoh Coins. How it works is that every time you spin the slot, a maximum of three coin icons of varying value pop up on reels one to three. If the icon depicting the mask of Tutankhamen shows up on reel five, the combined value of the three coins is added up and paid out – potentially up to 15 times your bet!

The second bonus is a Free Spins game activated by scoring three of the light ball Scatter icons across reels one, three and five. When it does activate, the graphics change from being on the outer temple steps to being inside it and a totally new set of reel icons appears. Every free spin reveals coins within treasure chests and they continue until you get three of the same coins – which is when it pays out. This feature has exciting visuals, in addition to boosting your cash stash for a big win.

Coins of Egypt video slot is a great game with top-notch graphics and lucrative game-play, including a house edge that is below the norm, so if you find yourself spinning your wheels, why not try spinning its reels?