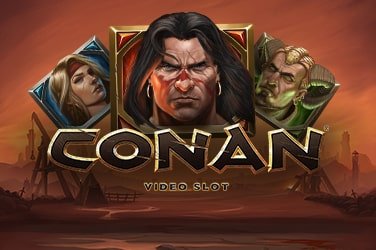 NetEnt’s Conan slot game features a plethora of special bonus features, including the chance to win up to 50 free spins!

Based on the action hero that has been around since the 1930s, NetEnt have provided this Conan online slot game with graphics and visuals that make Conan as superior as he has always been.

The developers use a modern-style comic book graphics theme for this game and provide the symbols with the same touch. Looking at the paytable available in this Conan slot game, players will be able to find a number of different icons available including what appears to be bronze, silver and gold coins, as well as weapons and armour that Conan uses, as well as his sidekick Valeria and his arch-nemesis, Thoth Amon.

The playing grid of this Conant online slot game features a total of 6 reels and 4 rows, and has a total of 24 active paylines per spin.

Players are able to adjust their bet and trigger other additional customisable features via the slot game panel at the bottom of the screen.

NetEnt have packed this Conan online slot game with a number of different special bonus features, including a Pay Both Ways mechanism. Although there are 24 paylines available in this game, players will essentially have 48 winning ways.

Furthermore, there are three different sections to this game with each one featuring a different bonus.

Players can activate the ‘Tower Wilds’ game, which will be active on reels one and two, and will cause the blue tower wilds to expand.

Furthermore, the ‘Mystery Symbols‘ game will see these icons appear on reels three and four, and will transform into the same symbol to help form additional wins.

On the fifth and sixth reels, players will find that any wilds that land will expand horizontally, as part of the ‘Battle Wilds‘ game.

In addition, there are three different free spin rounds available in this Conan online slot game, with players being able to activate each of them by landing three or more of the scatters that can provide between 10 and 50 free spins.

Players who trigger the ‘City of Thieves’ game will see that tower wilds will land on any reel and expand.

The ‘Walls of Tarantia’ game will see the battle wilds land on any reel and expand horizontally, whilst the ‘Temple of Serpent’ game will provide players with mystery symbols that can feature multipliers of up to 7x the bet.

Additionally, this Conan online slot game also incorporates linked reels, which can be in play at any point within this game.

The minimum bet that can be placed by Las Vegas Casino players on this Conan online slot game stands at €/£/$0.20 per spin, although the maximum bet allowed is a huge €/£/$200 per spin.

The return to player (RTP) rate of this Conan online slot game stands at 96.28%, whilst the medium volatility level means players can win a balanced number of prizes on a fairly consistent basis.

Indeed, this Conan slot game from NetEnt is packed with special bonus features that can make the overall gameplay experience one that is incredibly enjoyable and rather unpredictable at the same time.

Las Vegas Casino players will revel in the fact that up to 50 free spins can be won, whilst a slew of other special bonuses can also be activated!