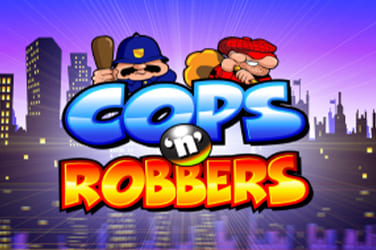 Designed and developed by Inspired Gaming, this Cops ‘n’ Robbers Megaways slot game features a number of fun graphics and visuals, with each of them having been provided with some great colouring.

The game is set on the backdrop of a city that has seen nightfall, whilst there is a cop and a robber that can be seen at the bottom of the grid.

There are a number of different symbols available in this Cops ‘n’ Robbers Megaways slot game, with each of them being designed expertly well. These include the royal playing card icons, as well as a cop car, which are then followed by wads of cash, a swag bag full of money, a copper and the game’s logo.

The wild icon of this game is the bulldog and this has the ability to help form additional wins via a method of substitution.

Due to being a slot game that features the Megaways mechanic, this Cops ‘n’ Robbers Megaways title has a playing grid that consists of 6 reels and the potential to show between 2 and 7 icons on each reel on any given spin.

With the potential number of symbols that can appear on the reels at any one time, there is the opportunity to win from a maximum of 117,649 different ways!

There are a number of Cops ‘n’ Robbers Megaways bonus features available to explore and trigger in this game!

The first is the Blue and Red Light features, with both of these mini-games being activated at random points within the game, although only one can be activated at any one point.

The great Cops ‘n’ Robbers Megaways bonuses do not come to an end there, though, as there is a free spins game that can be triggered. This is activated when players land 3 scatters or reach the end of the ‘Red Light’ game.

The free spins game will provide players with a multiplier that will increase with each win or cascade that is made in the game, whilst there will be a number of different special features within the Cops ‘n’ Robbers Megaways game that can be activated, including wild reels.

However, those who reach the conclusion of the ‘Red Light’ feature or land 3 scatters may trigger the ‘Chase Board’ game instead. This is a board-game style bonus in which players will get 3 rolls of the dice as they aim to get the robber around the board without being caught by the copper, who will move after the 3rd roll.

Cops ‘n’ Robbers Megaways online slot players who are successful in making their way around the board will receive a win multiplier that increases, with the potential to go up to 5x the bet.

Choosing Sid will see players continue with an additional cash prize being on offer.

There is also a ‘Gamble’ feature that can be triggered on wins that are worth 5x or more the stake that has been placed!

The return to player (RTP) rate for this Cops ‘n’ Robbers Megaways online video slot game from Inspired Gaming is 95.19% and features a level of high volatility.