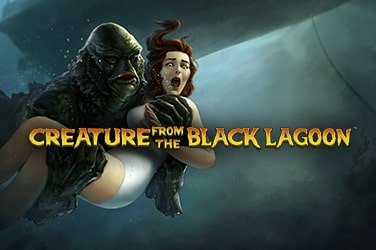 NetEnt pay homage to the 1954 horror film in their Creature from the Black Lagoon. The player is taken into the depths of the amazon rainforest where they encounter the half-human monster called Gill-man.

The succeeds in portraying the underlying eeriness by implementing through its soundtrack and design. The overall feel of this slot game is, furthermore, vintage which captures the essence of the classic movie. Creature from the Black Lagoon slot is in a 5 reel 20 payline format and has fun features such as re-spins and spreading wilds.

Creature From The Black Lagoon truly pays its respects to the original film. Though originally released in 2003, NetEnt’s revamped version of this slot shows that the base design of the game can hold its own in a competitive industry.

The color palette is based on darker shades of green. Additionally, the symbols in the game include some of the movie’s characters( Lucas, Karl, David and Kay), as well as certain tools that are essential for survival. This makes the theme and imagery of the video slot quite consistent with that of the original film.

Creature From The Black Lagoon Gameplay

The betting range of Creature from the Black Lagoon is 0.20 to 100 credits. This is fairly broad making it accessible for newer and seasoned players alike. The objective of the Creature From The Black Lagoon slot is to collect a combination of 3 or more similar symbols in order to yield payouts.

Some symbols yield higher payouts than the others. For instance, the lower value symbols include the survival essentials such as knives, oxygen tanks, cameras and binoculars. The characters in the movie pay higher yields. The highest among these is the Kay symbol yielding up to 37.5 times the original bet for 5 of a kind.

Creature From The Black Lagoon slot game is centred around wilds and re-spins. The monster is the wild in the game and has the ability to replace any symbol bar the free spin and target symbols in order to create a favourable combination.

The major attraction of Creature From The Black Lagoon slot , though, is the re-spin feature. The re-spin feature makes the wild a sticky wild. The more wilds that appear, the more re-spins are consequently granted. This gives the player more chances to yield payouts.

Note that in this slot game, If three or more free spin symbols appear anywhere on the reels, the player activates the free spin feature that grants up to 20 free spins. Finally, in Creature From The Black Lagoon the target symbol appears on reel 5. 9 target symbols yield up to an extra 10 free spins and enable the wild symbols to spread left and right .

Creature From The Black Lagoon Return to Player

The return to player (RTP) of Creature from the Black Lagoon is 96.47%. This means that theoretically, a player wins an average of 96.47 for every 100 bet made, Note that this average is a cumulative of over 4000 attempts.

With sharp retro features and details that tip their hat to the original movie, NetEnt surely succeeded in instilling a sense of nostalgia amongst online slot players. Furthermore, its wide variety of features in conjunction with a healthy RTP give it a strong replay value.