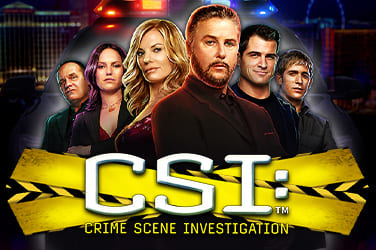 CSI: Crime Scene Investigation is a forensic investigation themed slot game based on the popular TV series of the same name. The background of the slots is a street in Las Vegas with bright lights. The character symbols are neatly designed and resemble the actual characters from the series and other symbols are the tools that are used in an investigation. All the symbols suit the game and don’t seem out of context. The sounds of the game go well with the overall slot theme and will remind you of the soundtrack of the original series.

CSI: Crime Scene Investigation is a 5-reel 4-row slot game with 50 fixed paylines. Landing at least two matching character symbols or at least three matching regular symbols will award a win. The online slot game has 12 regular symbols out of which 6 are the popular lead characters from the original TV series that have a high payout and the other six symbols are a Pistol, Magnifying glass, Bullet, Fingerprint Collector, Test Tube and Torch that have a smaller payout. The lead character symbols will appear stacked on the reels.

The Gold CSI Coin acts as a scatter symbol and can trigger Free Spins.

The Yellow Colored Crime Tape acts as a Wild Symbol and appears on the reels 2 to 5 and can replace other symbols.

The CSI: Crime Scene Investigation has a few excellent bonus rounds that are mentioned below.

When all the positions on the reels are filled with one character symbol, you will be awarded with a bonus of 30x to 100x the stake. This bonus is in addition to the standard payout of the symbol.

The objective is to pick four pieces of evidence which will double the winnings of this round with a 2x multiplier.

The theoretical return to player (RTP) of the CSI: Crime Scene Investigation slot game is 95.18% which is a bit low for a slot game.