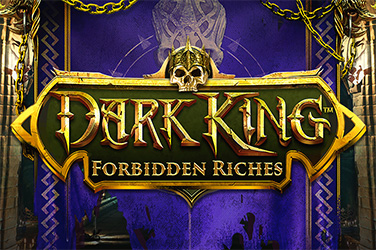 This slot game is a title that has been developed by NetEnt and features some chilling visuals that really help to bring the game to life.

The theme of the Dark King: Forbidden Riches game is one that follows a rather different take on the medieval era, with a dark and twisted effect having been implemented, as players will find that the game’s background is rather dark in colour and nature.

However, Las Vegas Casino players will also find that there are some stunning visuals, such as the Dark King to the left of the grid that provide a top user experience.

Dark King: Forbidden Riches has a number of icons available to try and form winning sequences with, with each icon having been given a great amount of detail by the developers. The traditional royal playing card icons have been given an expert touch, whilst the picture symbols have also been designed in a truly spectacular way.

This online video slot game will provide Las Vegas Casino players with a playing grid that features 5 reels and 3 rows, thus allowing bettors to easily follow what is taking place on the reels.

There are a total of 20 paylines available in Dark King: Forbidden Riches, each of which are fixed and active on each spin that a player makes when playing this game.

This NetEnt title might not have as many bonus features that some have come to expect, however they are still some excellent Dark King: Forbidden Riches bonuses worth triggering when playing this game.

Players who are able to land two or more of the wild icons (the blue sky icon) will trigger a multiplier. The value of the multiplier will be determined by the number of wilds that are on the playing grid, with values starting at 2x and going to 5x the bet.

The red gem that is encased in a golden design is the Dark King: Forbidden Riches scatter icon and this is key in triggering the free spins game that is available. Players will notice that a cross-shaped “hot zone” will be added to the middle of the reels when the game is triggered, and whenever a wild appears here, it will become sticky and provide a further one free spin.

The return to player (RTP) rate for this slot game is 96.06% and with a volatility level that is set at a medium level, NetEnt have provided Las Vegas Casino players with a great chance of obtaining a number of wins.

To spin the reels of this Dark King: Forbidden Riches slot game, players will need to play with a minimum bet of €/£/$0.20 per spin or for those who like to wager bigger amounts, the maximum bet is €/£/$400 per spin!

With a number of different increasing multipliers and free re-spins available, this Dark King: Forbidden Riches online video slot game will provide players at Las Vegas Casino the chance to enjoy some quality medieval action. Indeed, the fact that up to €/£/$400 per spin can be placed on a single spin will also be of a huge appeal to many!

If you liked reading this Dark King: Forbidden Riches slot game review, then you might want to try our other slot games at Las Vegas Casino now! Have some fun and may luck be with you.