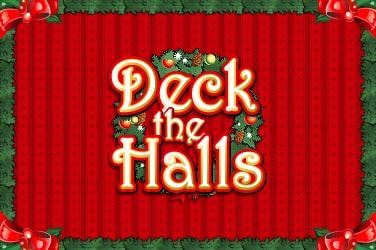 Perfect for anyone wanting to get into the Christmas spirit, Deck the Halls video slot is a festive-themed slot brought to you by Microgaming. Though a slightly older release, the slot game has a lot to offer and is a real stand out among the Christmas game titles players will find at online casinos. Read on for our full Deck the Halls slot review where we’ll be taking a look at the game in full.

Deck the Halls follows a standard slot game format with five reels and 30 active paylines. The game features beautifully hand-drawn symbols which all follow a festive theme. The normal symbols on offer include a festive tree, fireplace, Christmas gifts, a turkey, a star decoration and hanging baubles. There’s also a stacked Santa Claus symbol as well as a ‘Deck the Halls’ logo symbol which acts as the game’s wild to help form winning combinations. The highest payout on any line comes from landing five of the ‘Deck the Halls’ symbols in a row, awarding a 4,000 coin payout.

The return to player (RTP) percentage for Deck the Halls video slot is 95.38%, which is fairly standard for an online slot game. This Microgaming release also has low volatility, which indicates the game will seed small but frequent payouts which may favour players with a smaller bankroll. Deck the Halls is definitely a game that might suit a more casual player or somebody that’s new to spinning the reels – it’s going to take a longer amount of time to see a huge jackpot, though the risk of losing big is also slightly lower.

Though there’s no Deck the Halls bonus game, there is a great free spins round that players can try their hand at. Land more than three bell decoration symbols anywhere on the reels for 10 free spins. All winnings in this round will be doubled unless a wild symbol is used in a winning combination, in which case the winnings will be quadrupled! This is a great feature and the main way for players to see a valuable payout. Our only criticism on Deck The Halls slot game is that we would have liked to have seen a more creative and festive themed bonus game for Deck the Halls to really stand out from the crowd.

Microgaming is a top casino game provider with a long history of creating high-quality slots games. Though Deck the Halls may be one of its older releases, Microgaming has ensured users that the game is of a high standard and has been well optimised for mobile play. For that added peace of mind, Microgaming is fully licenced by the UK Gambling Commission and has won plenty of awards over the past two decades including ‘Mobile Gaming Software 2019’. It’s a software provider that players can put their trust in.

Deck the Halls is a festive slot that doesn’t disappoint. Fans of Christmas will fall in love with the hand-drawn decorations and spirit of the game, while new slots players will also enjoy the low volatility and simple gameplay. Though high rollers may struggle to keep entertained here, we think this slot makes the perfect choice to feel the magic of Christmas.

If you enjoyed Deck The Halls video slot and want to keep the track of excellence slot games you better take a visit to Las Vegas Casino slots page.