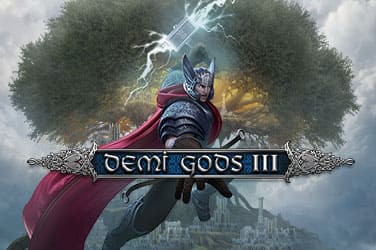 Demigods III is a slot game by spinomenal launched on 02.09.2019. Spinomenal is a leading source of gaming entertainment, with slot games available for various platforms. Play Demi gods iii and other online casino games at the Las Vegas casino.

With renowned deities like Odin, Loki, and Thor appearing in innumerable novels and films, Norse mythology has left an indelible mark on western society. Thanks to the newest series of Spinomenal online slots, they make a spectacular debut (supported by an equally dramatic soundtrack) on the reels. The gods are surrounded by fire and metal and ambient mists, which transport you to an ancient world, complete with animations for winning spins.

The Norse gods rule the reels, and the extra features are designed to take you on tour through the Nine Worlds of Viking mythology. These are the branches that extend from the World Tree:

There are many mythical online slots available, ranging from Vikings to Ancient Greece. Still, Demigods III offers a degree of depth and complexity that not all online slot games can match, and it does it in an amazingly evocative manner.

Demigods III is a 5-reel slot with 50 pay lines that uses the same reel structure as many other 5-reel online UK casino slots. Furthermore, you may modify your stake per line from 0.01 to 10.00, giving the game a minimum and maximum wager of 0.50 and 500.00 every spin. This will entice both low and high rollers to take advantage of the online slots game’s promised perks.

In this online slot game, the Wild is both a replacement and a paid pictogram that pays out 300 times the line bet for a five-of-a-kind combination. Raven is a non-paying symbol that awards 2x to win multipliers 3x.

Demigods III has several features including:

In this online UK casino game, if you don’t want to wait for the Scatter to trigger free spins, you may buy them for a charge. When you click the play button, you’ll be given the option to choose your wager and be told how much it will cost. You will receive 12 free spins.

This begins the same way many other free spins features do: you strike three or more Scatters, which grants you 12 free spins. Instead of spinning the reels, you’ll embark on a journey through a map that depicts all nine legendary worlds. Each time you activate free spins, replete with unique backdrop images, you’ll be transported to the next place. Each globe has its own set of bonuses to go along with your free spins: