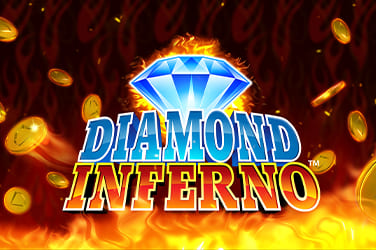 Players will certainly feel as though they are in an inferno in this Diamond Inferno online video slot game by Microgaming, as the graphics used will provide some heat off the screen.

There are a number of flames floating around the screen, whilst the entire background of this game is of a vivid red that will have players hoping they do not get burned.

The symbols that are available on the paytable of this Diamond Inferno slot game have been designed well, with a number of classic icons each appearing. There are traditional royal playing card icons, a set of dice, a dollar sign, a couple of gold bars, lucky sevens and a gold star.

Players who decide to try and give this slot game will find that the playing grid initially consists of 5 reels and 3 rows and 20 paylines. However, this all has the potential to change.

Diamond Inferno players able to strike a win on a spin will see the grid expand by one row and 10 further paylines, with the potential to expand the playing grid to a maximum of 6 rows and 50 paylines!

With so many bonus features available to talk about, it would be wise to jump straight in!

The first of the special features to have been provided by Microgaming is the expanding reels feature, which as we mentioned, will be triggered on a winning spin. These will only continue to expand on consecutive wins, though.

There is a wild icon that needs to be taken seriously in this Diamond Inferno slot game, as this has the potential to help form additional wins where possible, although it can only appear on the middle three reels (2, 3 and 4).

The scatter icon is the blue diamond and this has the ability to provide players with some top rewards. As with the Diamond Inferno’s wild icon, it can only appear on the middle three reels, but it can payout when just one of them appears, with up to 20x the bet available on row 6!

Microgaming has also provided Diamond Inferno slot online players with a respin feature in this game, which happens each time a win has occurred. This is essentially a part of the expanding reels feature.

Once Las Vegas Casino players are able to reach the final row of the playing grid, they will notice that the multiplier trail at the top of the grid will come into play. Any further win will see a multiplier highlighted and a respin be taken; there is a maximum of 10x the bet available.

96.19% is the return to player (RTP) rate that Microgaming have set for their Diamond Inferno slot game, whilst they have also provided a medium rate of volatility to their online slot.

A game can be played with a maximum stake of €/£/$20 on each spin, although Las Vegas Casino players can also play with a minimum bet of €/£/$0.20 on each spin of the reels.

As this slot game comes with a number of great bonus features, Las Vegas Casino players will not want to miss out on what this game has to offer them. There is plenty that can happen with each Diamond Inferno’s spin, thus keeping the game as exciting and as appealing as possible, whilst, of course, potentially lucrative, as well!

Find more Las Vegas Casino slot games like Diamond Inferno now! Have some fun and may luck be with you.