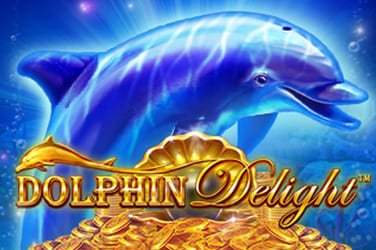 720 ways to win and up to 96 free spins are available in Skywind’s Dolphin Delight slot game that is available to play here at Las Vegas Casino.

Players will be taken to the depth of the oceans with this Dolphin Delight slot game, as Skywind provide Las Vegas Casino players with a truly remarkable underwater adventure.

The visuals adopted by Dolphin Delight slot developers are of a top-level as a number of stylish graphics have been used. Unsurprisingly, players will feel as though they are underwater, as there has been a deep blue underwater setting provided, whilst there have been some corals and plants added to the seabed, as well as the various fish and dolphins swimming around.

When taking a look at the Dolphin Delight video slot’s paytable, there are a number of expertly designed icons available to collect and try and form winning combinations with. These icons include things such as the shells, the starfish, the seahorse, the green fish, the orange fish, the octopus, the turtle and the underwater dolphin.

There are a number of other special symbols, however, that will be covered in the bonus features.

This Dolphin Delight online slot game features a playing grid that is slightly different to many of the traditional forms that have been adopted as they provide one that consists of 5 reels in the formation of 3-4-5-4-3. There are a total of 720 ways to win, as this game features a Win Both Ways mechanic.

Furthermore, in the Dolphin Delight video slot, there is a game panel at the bottom of the screen that can allow players to adjust their bets and click on a number of different options to enhance their gameplay experiences.

As mentioned, there are a number of different special features within this video slot via the use of some special bonus icons. There is a wild which is a breaking wave icon, and this has the ability to provide players with the potential of forming winning combinations as it can substitute all regular icons on the paytable.

Furthermore, there is a leaping Dolphin that features against a backdrop of a full moon, and this is considered the game’s scatter icon. By landing 3, 4 or 5 of these in any position on all the reels, players can win 2x, 10x or 50x their total bet.

However, the main scatter of Dolphin Delight slot game is the oyster and pearl bonus symbol, and if players are able to land 5 of these across consecutive reels, they will trigger the free spins round in which they will receive 8 to begin with.

If players are able to continue to win and make bonus combinations, they can receive up to 96 free spins in total.

Skywind have provided this Dolphin Delight online slot game with a return to player (RTP) rate of 95.74%, although this could be seen as rather average. It does feature a high volatile level, therefore, meaning players are able to win big rewards at certain moments.

Those that do look to play this video slot game will find that they can place a minimum bet of €/£/$0.50 whilst those that want to wager big amounts of money are able to bet €/£/$2,500 on each spin.

Skywind have got this Dolphin Delight online video slot games looking brilliantly with the visuals and graphics that they have used, whilst there are a number of animations that make it incredibly immersive for those at Las Vegas Casino.

Furthermore, the special bonus features including the free spins round help to provide a rather enjoyable gameplay experience and one that is rather different to many of the other slots available.