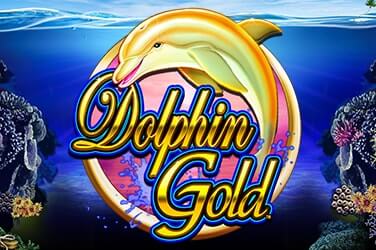 Perhaps unsurprisingly, Dolphin Gold slot players will find that they are taken to an underwater setting that features a number of animated sea creatures that help players feel immersed within the theme.

The visuals and graphics adopted and used by Lightning Box for this Dolphin Gold are of a high quality, with the blue ocean being provided featuring a number of different objects that can be found underwater, such as corals and plants, as well as schools of fish and shrimp that all swim by you in addition to a number of sea turtles that are looking for food to eat.

There are a number of icons available on this paytable, with Dolphin Gold players able to find the 9, 10, J Q and K icons, which are the lowest value icons. Furthermore, there are a number of sea life icons available to collect include in anemone, playful seahorses, schools of fish, sea turtles and manta rays. There are also blue dolphins that appear on reels two, three and four, and these act as wilds as well as being able to bring the biggest prizes possible, including a maximum of 1000x the bet.

Las Vegas Casino players playing Dolphin Gold slot will find that there is a playing grid that is 5 reels and 4 rows big, featuring a total of 14 different paylines. These paylines are adjustable though, therefore allowing players to customise their overall gameplay experience.

These can be adjusted via the buttons that are available in the bottom of the screen, including other features such as autoplay, and the adjustable bet functions.

Dolphin Gold video slot features a number of bonus features including the wild icon, which is the Blue Dolphin. As mentioned, these Blue Dolphins may provide the biggest payouts when they appear, but they can also substitute for any other symbol available on the playing grid to help further enhance any wins that may be achievable.

Furthermore, these Blue Dolphins will also help to trigger the scatter feature, if 6 to 12 of them appear in any position. This feature will then unlock the number of free spins that are available, and this can be between 3 and 21. In addition, this free spins game can be retriggered, and they are played with the amount of the bet that activated the game. During the feature, stacks of wild gold dolphins may also appear on reels 2, 3, 4 and 5 and will still function as wild icons.

Lightning Box Gaming have provided this Dolphin Gold slot game with a return to player (RTP) rate of 95.31%, as well as a medium volatility level.

Las Vegas Casino players who decide to deep dive to the bottom of the ocean in this Dolphin Gold slot game will be rewarded with the fantastic prizes and brilliant bonuses that are available.

Whilst the graphics help to provide an immersive gameplay experience, there is no doubt the dolphin symbols help to take this online slot game to another level.