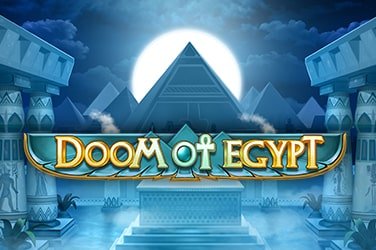 Ancient Egyptian themes have proven popular with Las Vegas Casino players over the years, which is why we have provided this Pay’n Go Doom of Egypt slot game.

Players who do choose to play this Doom of Egypt video slot will be transported to a Pharaoh’s burial chamber, which is produced with an eerie blue colour. The pillars that have hieroglyphic drawings on them help to further enhance the ancient Egyptian game theme Play’n Go have adopted. The playing grid of the slot features a number of symbols that have all been provided a Golden trim, thus to further highlight the wealthiness that some were able to enjoy in this particular historic period. Doom of Egypt slot icons include things such as royal playing card values, as well as three Egyptian kings – Ramses, Thutmose and Amenhotep – whilst Anubis is also represented as the most valuable icon. The online casino game’s wild – and also combines as the scatter – is the Scarab Beetle.

The dark-blue playing grid found in this slot follows a traditional playing formation, as it contains 5 reels and 3 rows. There are just a total of 10 paylines available in Doom of Egypt – which are adjustable – making this Play’n Go title simple to follow, despite there being a feeling more could have been added. Play’n Go have also included their traditional online slot game panel at the bottom of the grid that can allow players to customise their gameplay experiences as much as possible and with ease.

As mentioned, one of the biggest draws for Las Vegas Casino players to play this Doom of Egypt slot game will come via the ‘Free Spins’ bonus feature that the developer has provided. This can be triggered when 3 or more of the Scarab Beetles appear in any position on the reels, with players winning 10 free spins. Before the Doom of Egypt game bonus starts, a random icon will be chosen to act as a special expanding symbol throughout the duration of the feature. When it lands, it will expand to fully cover its respective reel but this will only happen if there are at least 3 low-value icons or 2 high-value icons.

More Bonus Features Of The Slot

Another decent game bonus feature that can be found in this Doom of Egypt slot is the win method. Traditionally, many slots will require icons to be adjacent to each other when appearing to form a win, however, this game will allow them to fall anywhere in order for a reward to be handed out.

Players can play this game for as little as €/£/$0.01 for each line played, whilst a maximum bet of €/£/$50 can be placed when all of the betting levels and paylines have been activated. Play’n Go have set a return to player (RTP) rate of 96.21% for Doom of Egypt online slot which can be seen as average for the developer, although the high volatility level means wins can be as much as 5,000x the stake when 5 Scarab Beetles appear.

With so many different Ancient Egyptian-inspired slot games already available on the market, it can be hard to make one stand out from the other. Nonetheless, Play’n Go have produced a quality title with their Doom of Egypt video game as they used many of the features that have made some of their best titles so successful.