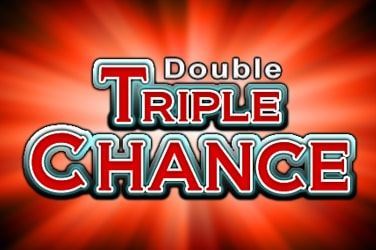 You will often find slot game developers going back to some of their classic games and releasing them in a new avatar with some tweaks and changes. Double Triple Chance is one such game, being a refurbished version of Triple Chance, with both slots having been released by Merkur. This new version has better winnings, easier gameplay and therefore a better experience for players.

The visuals and icons are quite basic on Double Triple Chance, as it is a tribute to classics. There is a dramatic red background to the reels, while the symbols are all traditional as well, with the standard fruit icons such as watermelons, plums, cherries, oranges and lemons all on the reels. There are also the classic red number sevens which show up, along with bells, and green diamonds. All of this means that you will get quite a throwback when playing this video slot.

Double Triple Chance is a three reel with five fixed paylines – again a throwback to classic slot games. There are no wilds or scatters, while all the icons are stacked, meaning that you can win quite big at times. The red sevens can pay out up to 150x of your stake, for example, while the watermelons can reward up to 40x, and the bells have a maximum 12x win. The other symbols all pay out a maximum of 8x.

There are two Gamble options available during Double Triple Chance video slot game,at the bottom of the reels, which can be activated after any win. The one on the left is a card game, where players need to predict the colour of the next card being drawn correctly to double their win. The one on the right is a ladder, with the slot player needing to press the Gamble button at the correct time to move up the rungs and collect rewards. A wrong move on either game will lead to the win being forfeited, while the maximum possible reward is 140 coins.

There are not too many bonus features on Double Triple Chance online slot, with the Rewin feature being the only one. This is triggered when the player lands matching symbols on all the reels. Of course, you receive a big payout for this, and then the bonus game is launched, where a spinning wheel will show up. You need to land on one of the green spaces on the wheel, which will give you the full reel win again, and this process can happen a maximum of six times, or until you land on a red space, which will end the game.

Sometimes, simple is better, and that is definitely the case with Double Triple Chance. While it may not have too many bonuses or fancy features, it is easy to understand and play, and there is the potential of picking up decent wins, all of which should appeal to players looking for a simple slot game experience. Check this and other great video slot reviews at Las Vegas Casino